Jeanine Pirro Confirms She Was Suspended From Fox News 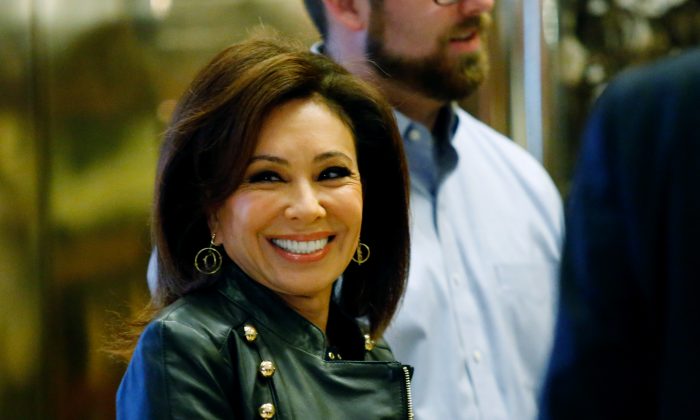 Jeanine Pirro, arrives at the Trump Tower for meetings with US President-elect Donald Trump, in New York on Nov. 17, 2016. (Eduardo Munoz Alvarez/AFP/Getty Images)
By Masooma Haq

Fox news host Jeanine Pirro confirmed she was suspended from her Fox show in March over comments she made about Rep. Ilhan Omar, and that she is uncertain about her future with Fox News.

Pirro was speaking to former White House aide Sebastian Gorka during a commercial break on his live radio show,  “America First,” on Sept. 3.

Pirro said that she was told not to speak with other media outlets by her supervisors at Fox News.

“Fox reviews everything. They’re unbelievable,” she said. “They’re still saying you cannot do Bill O’Reilly, you cannot do Newsmax.”

“I’m worried that that suspension was the basis to tee up for anything I do wrong, they’ll fire me,” she said.

To that Gorka replied, “Keep doing what you do.”

Gorka’s show is broadcast on his website and on YouTube. Pirro’s conversation with Gorka could be heard on the YouTube broadcast of the show even during the commercial break.

Pirro was abruptly removed in March from Fox News’ programming after she questioned the loyalty of Rep. Ilhan Omar (D-Minn.) in one of her popular segments on Fox News.

“Omar wears the hijab, which according to the Quran 33:59, tells women to cover so they won’t get molested,” Pirro said during her “Opening Statement” segment on March 10. “Is her adherence to this Islamic doctrine indicative of her adherence to Sharia law, which in itself is antithetical to the United States Constitution?”

After it became evident that Pirro’s regular Saturday appearance on Fox had been canceled, the station released a formal statement: “We strongly condemn Jeanine Pirro’s comments about Rep. Ilhan Omar. They do not reflect those of the network and we have addressed the matter with her directly.”

After a two week absence from the show, Pirro made a statement about the controversy.

“I’ve seen a lot of comments about my opening statement from Saturday night’s show and I did not call Rep. Omar un-American. My intention was to ask a question and start a debate, but of course because one is Muslim does not mean you don’t support the Constitution,” Pirro said. “I invite Rep. Omar to come on my show any time to discuss all of the important issues facing America today.”

President Donald Trump, of whom Pirro has been a staunch defender on her show, sent out a message on Twitter upon hearing the news.

“Bring back @JudgeJeanine Pirro. The Radical Left Democrats, working closely with their beloved partner, the Fake News Media, is using every trick in the book to SILENCE a majority of our Country. They have all out campaigns against @FoxNews hosts who are doing too well.

“Fox must stay strong and fight back with vigor. Stop working soooo hard on being politically correct, which will only bring you down, and continue to fight for our Country. The losers all want what you have, don’t give it to them. Be strong & prosper, be weak & die!

“Stay true to the people that got you there. Keep fighting for Tucker, and fight hard for @JudgeJeanine. Your competitors are jealous – they all want what you’ve got – NUMBER ONE. Don’t hand it to them on a silver platter. They can’t beat you, you can only beat yourselves!”