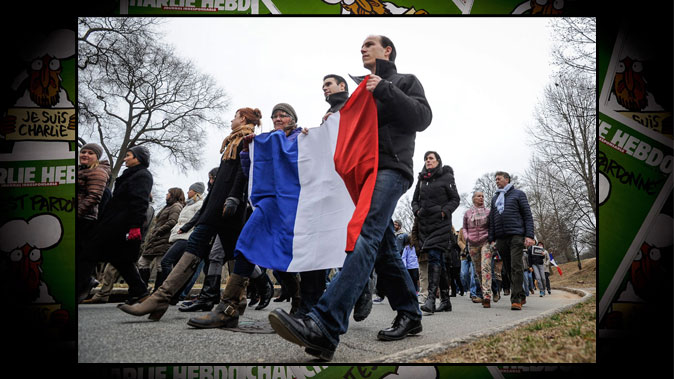 Je Suis Charlie Hebdo, Whether I Would Draw That or Not

From the absurd claim that there are “no-go zones” in European cities where only Muslims venture, to the very deaf whining that Muslims must condemn the Jan. 7 Charlie Hebdo murders (they do, they have, they are), some reactions to the tragedy in Paris have been foolish.

Free speech is one of the super core, ultra core, American principles, as we all know. So the idea that anyone would kill over a cartoon is repellent. Looking for pictures to go with this column, I found an image of a march in Pakistan, and men holding a banner saying the surviving cartoonists should be hung. I was offended. That feeling of righteous indignation could lead us in a wrong direction.

“It’s never OK for the government to say, ‘you can’t say that.'”
— Greg Magarian, professor, Washington University at St. Louis

We need to keep two principles in our heads at the same time,” said Greg Magarian, JD, professor of law at Washington University at St. Louis and an expert on freedom of speech, in a statement.

In a phone interview, he said he had been drawn into “conflicts with people from opposite directions.” Some people are so shocked that they have blamed all Muslims for the attacks.

That is not right or fair. Oklahoma City bomber Tim McVeigh, mass murderer and cult leader Jim Jones, 1963 Birmingham Bomber Thomas Blanton, and the Atlanta Olympic bomber Eric Rudolph were my people, ethnically. Nobody aligns me with them, and nobody asks me to publicly condemn their crimes. It goes without saying.

The other thing is, some people have written editorials criticizing Charlie Hebdo’s speech. I won’t have that. I do not want to hear that. Garrett Epps, a constitutional law professor, posted on Facebook that he did not want to hear it at all. “So I am not interested in finely parsing whether Charlie Hebdo was an equal opportunity racist, or good, or bad, as far as I am concerned, even if it was STORM FRONT, its staff cannot be murdered,” he wrote.

Magarian said, “When there is an attack on free speech, we condemn it unequivocally.”

No one should then come and quibble over the offensive speech, as people have done with the cartoons. Nothing excuses violence against a speaker, a writer, or an artist.

“No matter what the content, we don’t justify any sort of attack,” said Magarian.

On the other hand, people have republished the cartoons. “We want to defend free speech. We don’t have to mirror what is being attacked,” said Magarian. Epoch Times has not.

“People were saying, ‘let’s wrap ourselves in the most offensive things Charlie Hebdo published,'” said Magarian. He thinks that is not a good thing to do, and so do I. There are peaceful, normal Muslim people who are hurt by the Charlie Hebdo cartoons, according to Magarian.

He said he knew he was contradicting himself. But the essential idea is that free speech is an absolute value.

Offensive speech is just as protected as inspiring, beautiful, uplifting speech (that you agree with, the best kind.)

“We shouldn’t embrace the content of Charlie Hebdo’s speech, and we shouldn’t condemn that content in connection with this attack,” he said. “We should simply embrace our Muslim brothers and sisters while condemning any attack on free speech.”

Every person has the right to express him or herself.

“Going forward, we have the legal right to speak,” said Magarian. “It’s never OK for the government to say ‘you can’t say that.’ We allow all speech, with certain exceptions of incitement to violence or threats. If speech is offensive, we call them on it,” he said, and in that process of calling them on it, maybe learning happens. Because people don’t always know when they are right or wrong about an issue.

But America is definitely right about free speech.

I give you George Washington: “If freedom of speech is taken away, then dumb and silent we may be led, like sheep to the slaughter.”