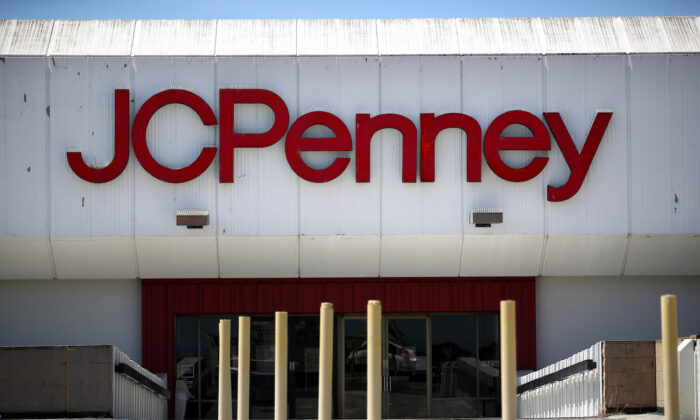 A view of a temporarily closed JCPenney store at The Shops at Tanforan Mall in San Bruno, Calif., on May 15, 2020. (Justin Sullivan/Getty Images)
AMERICA

Bankrupted JCPenney announced Thursday that it will shut down 154 stores over the summer, providing a list of them and adding that store closing sales kick off on June 12.

The firm filed for Chapter 11 bankruptcy protection several weeks ago, citing revenue losses caused by nationwide closures to slow the spread of the CCP (Chinese Communist Party) virus. Like many other stores, JCPenney was deemed nonessential and had to temporarily shutter its locations.

“While closing stores is always an extremely difficult decision, our store optimization strategy is vital to ensuring we emerge from both Chapter 11 and the COVID-19 pandemic as a stronger retailer with greater financial flexibility to allow us to continue serving our loyal customers for decades to come,” Chief Executive Jill Soltau said in a statement about the closures at the time.

As of June 4, the Texas-based company said it reopened around 500 locations around the United States as states have reopened.

“Until this pandemic struck, we had made significant progress rebuilding our company under our Plan for Renewal strategy–and our efforts had already begun to pay off,” Soltau statement said. “While we had been working in parallel on options to strengthen our balance sheet and extend our financial runway, the closure of our stores due to the pandemic necessitated a more fulsome review to include the elimination of outstanding debt.”

After the closings are completed, JCPenney will only operate just over 600 locations, down from 846, according to a document filed with the Securities and Exchanges Commission (SEC). The closures represent about 30 percent of the retailer’s stores, and they will be shuttered between the current fiscal year and the next fiscal year, according to The Associated Press.

Some 192 stores will be shut down for the current fiscal year, and then 50 more will be closed the following year, the company stated.

Even before the pandemic, JCPenney long suffered declining sales and has been saddled with debt for years.

The latest plan “reflects latest thinking on stores as of April 2020” and the “exact number continues to evolve,” the firm wrote, reported Business Insider.

JCPenney is the fourth national retailer to announce a bankruptcy filing in May alone as the CCP virus continues to wreak havoc on businesses. J.Crew on May 4 filed for bankruptcy, as did Neiman Marcus and Stage Stores days later.