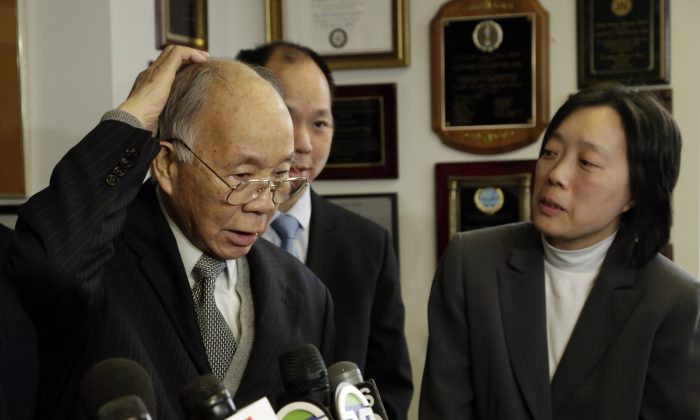 Kang Chun Wong, 84, who claims he was assaulted by police for jaywalking, describes his injured head during a news conference, in New York on Jan. 27, 2014. (Richard Drew/AP)
New York

NEW YORK—An elderly man who was allegedly assaulted by police officers after being ticketed for jaywalking filed a $5 million lawsuit against the NYPD, the city, and police officers on Monday.

The man is 84 year-old Kang Chun Wong, originally from Canton, China, and a New York resident for over 40 years.

He was crossing the street on January 19th around 4:30 p.m. when a police officer stopped him and asked for his ID. Wang, who has limited English but understood the word ID, gave his ID. After a few minutes he asked for his ID back in Chinese and made a hand gesture, according to his family lawyer, Hazel Chin.

Wang head was hurt and he needed four staples to close the wound. He said he was also hurt on his chest, the side of his face, right elbow, right ribs and back.

“We can have programs run by the police for pedestrian safety without taking away citizens’ civil rights,” said Wong’s lawyer, Sanford Rubenstein. “His injuries come from interaction from the police.”

Jeffrey Rothman is a lawyer who won a lawsuit against the NYPD for Shawn Carrié, who was assaulted by police when taking part in Occupy Wall Street. He described Wong’s experience as “very disturbing.”

“The police need to take seriously what is written on their squad cars: Courtesy, Professionalism, Respect,” said Rothman.