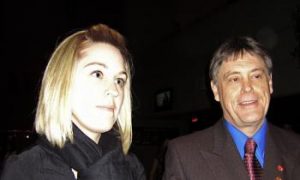 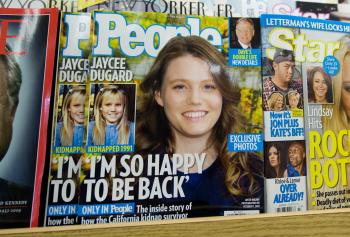 People Magazine's October 26 issue with recently freed kidnapping victim Jaycee Dugard on the cover, appears on a newstand in Washington on October 16, 2009. (Saul Loeb/AFP/Getty Images)
US

By Ian Ritz
Print
Kidnap victim Jaycee Lee Dugard, was awarded $20 million by a California legislation board Friday as compensation. Dugard spent 18 years in isolated captivity while she was held in a secluded structure in her kidnapper’s backyard.

Dugard was approved for the $20 million dollar payment based on the State Of California’s lack of supervision for Phillip Craig Garrido, according to a BBC report.

Garrido was on parole for a sexual offense when he abducted Dugard in 1991. Garrido abused her sexually and held the children that she gave birth to while in captivity in tents in his backyard in a rural area outside of Antioch, Calif.

Governor Arnold Schwarzenegger will have to approve the court order before it is final, according to the report.

"It is compensation for three people for the rest of their lives who have been horribly damaged over a period of 17 or 18 years," state mediator Daniel Weinstein told The Associated Press.

The fact that the State Of California admitted their inability to monitor a sexual predator may be the beginning of new restrictions on parolees. The state could lose $20 million from the already-suffering state budget if the decision is approved by Governor Schwarzenegger.

For Dugard, who was recently featured on the cover of People magazine, the ruling was monumental.

There is no official word as to when Dugard will receive her payment due to the ongoing budget crisis in California.

Dugard’s father, who did not know of her whereabouts while she was in captivity, recently filed a lawsuit against her.

Kenneth Slayton claimed that he was Dugard’s father only after her release in August of last year and no word has been given as to whether or not the suit will hold any ground in court, reported California’s CBS 13.