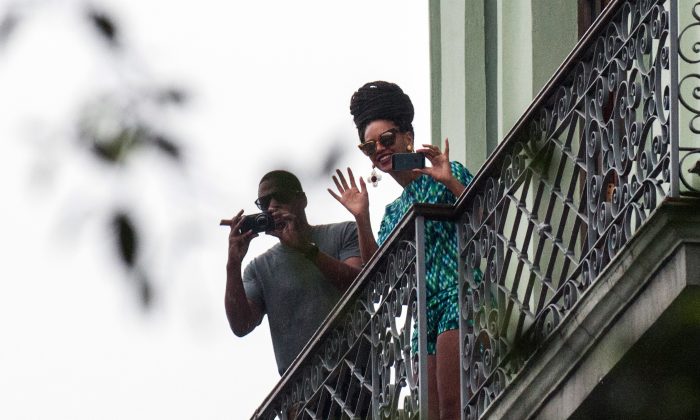 US singer Beyonce is seen in a balcony of the Saratoga Hotel in Havana next to her husband Jay Z, on April 5, 2013. (STR/AFP/Getty Images)
Americas

Jay-Z and his wife and fellow artist Beyonce traveled to Cuba to celebrate their fifth wedding anniversary, which sparked criticism from numerous people, including elected officials.

Jay-Z released a track called Open Letter on April 11, in which he suggests he received clearance from the White House to got to Cuba.

“Boy from the hood got White House clearance,” he says, after boasting that he “done turned Havana to Atlanta/Guayabera shirts and bandannas.”

But Jay Carney, the president’s press secretary, told reporters that the White House didn’t have anything to do with it.

“I am absolutely saying that the White House, from the president on down, had nothing to do with anybody’s travel to Cuba,” he said. “That is something the [Department of] Treasury handles. The president did not communicate with Jay-Z over this trip.”

Among the people disconcerted by the trip was Mauricio Claver-Carone, one of the top pro-embargo lobbyists in Washington.

Others charge that people should be free to travel to the country. Treasury Department regulations state that no one can travel to Cuba unless they have a license to do so. Cuba is under sanctions from the United States for reasons including continued mistreatment of its citizens under repressive rulers.