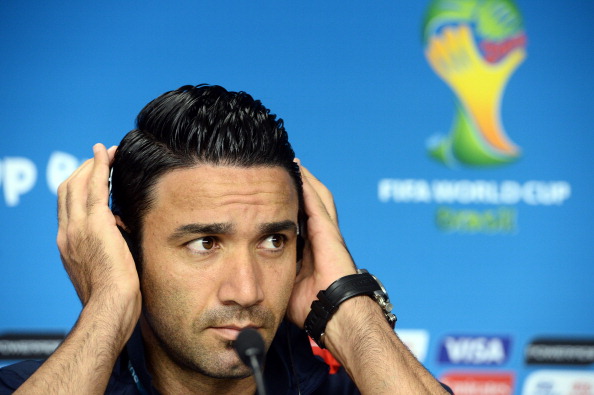 Iran's midfielder Javad Nekounam adjusts his headphones during a press conference before a team training session at the Baixada Arena in Curitiba on June 15, 2014, on the eve of their Group F 2014 FIFA World Cup football match against Nigeria. AFP PHOTO / Jewel Samad (Photo credit should read JEWEL SAMAD/AFP/Getty Images)
Soccer

Javad Nekounam and wife Nasrin Moghadam had a son in 2013, named Arian.

He posted a photo on Twitter of the child last year.

Iran’s coach Carlos Queiroz on Sunday told The Associated Press he’s trying to ease pressure on his players against Nigeria on Monday.

“The economic and political situations have put a team from Iran at the complete disadvantage in relation to other teams that are here,” Queiroz told AP.

Nekounam, the Iran captain, said that the pressure has in fact eased up.

“I have no stress, I don’t feel any pressure on myself,” he said. “We need to be at peace and we need to be calm and enjoy the game tomorrow.”

Queiroz, who is the former head coach for Portugal and Real Madrid, said Iran will be a difficult team to beat.

“The 2006 World Cup was a memorable experience. Although we didn’t have success, I have good memories of the tournament and I realized many things that can help me become a better player and that every time you play, you get experience from that game. We couldn’t get the results we wanted but I saw that even the most famous players give everything at every moment, and that is why they are the best,” he said, according to The Guardian.