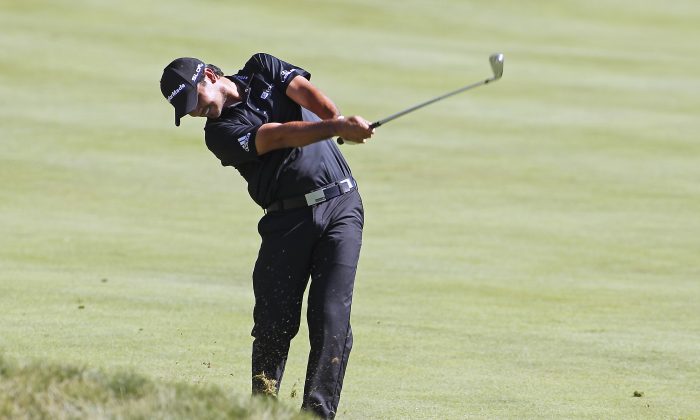 Jason Day hits his second shot on the 14th hole during the first round of the Deutsche Bank Championship golf tournament in Norton, Mass., Friday, Aug. 29, 2014. (AP Photo/Stew Milne)
Golf

Norton, MA—There is nothing worse one can say about a promising PGA Tour player than one word—potential. When potential is applied to a player its more about what can be done—a future possibility—not an actual certainty. Case in point, Jason Day. The 26-year-old Aussie has been a steady force at the high level of global professional golf for a few seasons now.

Tied for 2nd round lead at 8-under-par with Ryan Palmer at the Deutsche Bank Championship, Day has been sending strong signals he has more in store than just top finishes. Day had an opportunity to separate himself from the field—posting a five-under-par 31 for the outward nine. However, three late bogeys in the round—including one on the very birdieable par-5 18th—has created a bunched leaderboard where any number of players can emerge with two rounds to play.

Rated among the top ten players in the world, Day has played into the mix in a number of majors. Has been as high as 2nd in The Masters and US Open. In the 2013 PGA he tied for 8th. This year Day captured the WGC Accenture World Match Play event and all looked as if this year was set for a major launch until a nagging thumb injury sidelined him for a time.

At last week’s kick-off the Playoffs Day was tied for the top spot heading into the final round at The Barclays. His play was not bad—just not sharp enough to overcome a near flawless final round 65 by eventual winner Hunter Mahan.

Day has had from time to time issues with poor putting during crucial times. But his relentless march to the top of the leaderboard when in fine form indicates a talent just ready to accomplish even greater titles in the near term.

The Aussie contingent on the PGA Tour is a small one but talented group. Adam Scott, until supplanted by the extraordinary play of Rory McIlroy, was the world #1 player. It was Day who pushed eventual winner Scott hard during the 2013 Masters—nearly becoming the first Aussie to win the green jacket.

One of the most interesting aspects in watching the finest players compete is when they develop the edge to finish off events. Day has done well, in winning certain events, but the big moments have escaped him to date.

Some players just need a bit of seasoning to get through the most pressure-packed situations. Tom Watson early in his career had a propensity to play well and get into final round leads at major events. His inability to close out events would have shaken others. In Watson’s case it became the catalyst for him to push through and win—including epic wins against the world’s best at that time Jack Nicklaus.

The same was the case for Phil Mickelson. Close calls were happening with frequent regularity but Lefty was able to break through and now has won three of the four major titles.

Beyond the likes of McIlroy the separation point for the 10-15 best players in the world is a very fine line. A win this Labor Day weekend could very well help Day push his name into the very small circle of dominant players and a possible precursor to his first major win in 2015.

The final 36-holes at TPC Boston looks to be similar to what happened last week at Ridgewood CC. The man who can outplay his closest rivals will take him the top honors. For Day — the future is right in front of him. Can he begin to show that he is more than potential and more of a certainty at the highest levels of professional golf?

We shall soon see.