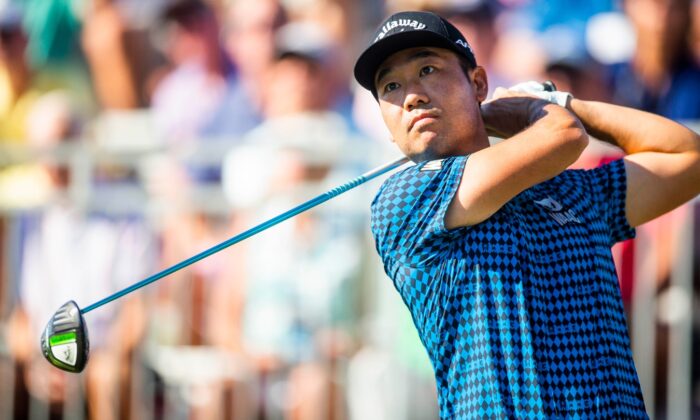 Jason Kokrak and Kevin Na teamed up to overcome a three-stroke deficit Sunday and win the QBE Shootout at Tiburon Golf Club in Naples, Florida.

“I think it’s just a little bit of confidence going a long way for a pro golfer,” Kokrak said. “We have a fickle mind and I think if you get a little confidence, goes a long way.”

The duo recorded a 12-under 60 to tie the tournament record in the four-ball format, finishing 33 under for the event.

Only the final day of competition featured a four-ball format, which involves each golfer playing his or her own ball throughout play. The lower score from the team of two golfers is recorded as the score for that hole.

Nine straight birdies on Nos. 6 through 14, the first seven coming from Na, were the difference for the winning team.

“I started making some putts and hit some really good shots in there and it was just one after another after another and I just kept going,” Na said. “That chip-in on 9 was huge. I think that was a tough hole to birdie and for me to chip it in, I felt like we really gained one there. I think I made seven in a row and the eighth one I was in there close and he finally made one. On the back nine he told me—I said, ‘Hey, when are you going to show up?’ He said, ‘I’ll be there when you really need me,’ and he really showed up when I needed him.”

The team’s 183 total was a stroke short of the 33-year-old event’s record for 54 holes, set by Fred Couples and Raymond Floyd in 1990 and matched by Matt Kuchar and Harris English in 2013.

Sam Burns and Billy Horschel scored a 61 Sunday to finish a stroke back in second place.

“It was a fun day out there. We played really well and it just sucks to come up one short, that’s all,” Horschel said.

Australians Jason Day and Marc Leishman, who led the first two days, struggled with a final-day 65, pushing them down into a third-place tie with Kuchar and English (31 under), two shots behind the winners.