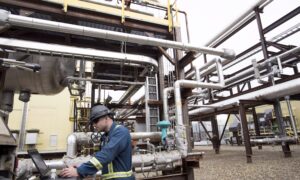 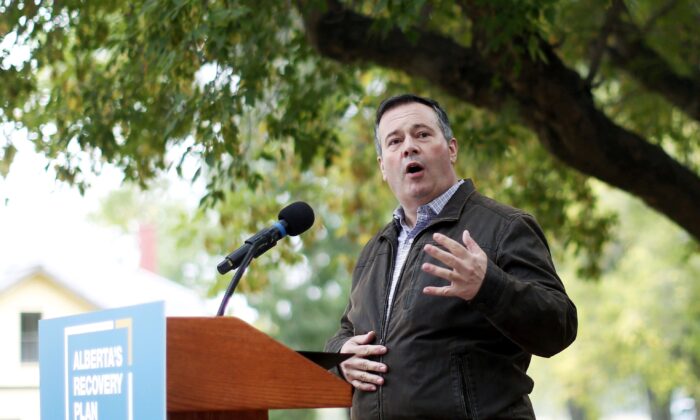 Alberta Premier Jason Kenney makes an announcement at a news conference in Calgary on Sept. 15, 2020. (The Canadian Press/Todd Korol)
Viewpoints

Jason Kenney Must Not Relent in the Face of Socialist Smears

For this sacrilege, public-sector unions and their allies in the media are turning up the heat with dishonesty and hyperbole. They are misusing poll numbers to smear Kenney, and the Alberta Federation of Labour has even started a “Stand up to Kenney” website and activist network.

Union and legacy media attacks will reach fever pitch as fiscal challenges necessitate tough decisions from the premier. This is precisely when Alberta needs Kenney and the United Conservative Party to show mettle. Rather than follow other provinces’ lead, they need to respect civil liberties and double down on the campaign platform of economic liberalization.

If anyone takes the time to examine the polls showing Kenney in a negative light, there are immediate red flags, especially in the interpretations. On Nov. 25, for example, a paid-placement newsrelease titled “Albertans ready for change: poll UCP slips behind NDP in approval ratings” was posted on The Associated Press’s news wire service.

Shocker: the online poll of 1,205 Albertans in November was commissioned by the Canadian Union of Public Employees. One has a hard time taking the press release seriously from an organization that thrives on forced union dues on taxpayer-funded salaries and is fiercely political.

CUPE states as fact that “If a provincial election were held today, Albertans would send Jason Kenney and the UCP packing and return the NDP under Rachel Notley.” The union leaves no doubt as to where its loyalties lie.

However, CUPE’s own poll numbers, gathered by Environics Research, only give the NDP 38 percent. While the UCP is back at 32 percent, 20 percent of the respondents were undecided, and another 11 percent favoured parties that align more closely with the UCP: the Wildrose Independence Party and the Alberta Party.

The sample also appears to have a clear selection bias toward urban residents. Slightly more than half of the province’s population are not in Calgary or Edmonton, and the rural electorate has Kenney and the UCP ahead with 48 percent versus the NDP’s 37 percent.

Longtime Calgary-based activist and commentator Cory Morgan warns against reading too much into the polling. Regarding any slant in the process, he says it “depends more on who commissioned the poll than on who did the poll. … Slant or not, pollsters are little better than fortune tellers for accuracy these days.”

Media Not for the People

One poll that merits more interest is from the non-profit Angus Reid Institute. It has exhibited a downward trend for Kenney over the past year, and as of November it finds him to be the second least popular premier.

The CBC has jumped on this. In typical hyperbole, its headline reads: “As COVID-19 cases soar, Jason Kenney’s approval rating plummets.” In fact, Kenney’s rating went from 42 percent to 40 percent between August and November—not exactly earth shattering.

Much like the unions, CBC lives on forced dues via taxation and has the same bias. The lion’s share, over $1 billion, comes straight from the federal budget. You might wonder what our national broadcaster, which crowds out independent media, had to say about Manitoba Premier Brian Pallister. With 32 percent approval, he is the least popular on the list, down from 44 percent in August.

Pallister received more even-handed CBC coverage, perhaps because he has some of the strictest lockdowns in Canada, according to the Angus Reid Institute. The CBC attributed Kenney’s slight decline in approval to his lighter COVID-19 approach, such as Alberta’s lack of a province-wide mask mandate. However, CBC did not attribute Pallister’s steeper decline to his lockdowns.

The kernel of truth in the poll numbers, overlooked by progressive media, is that Kenney faces staunch criticism from more conservative and separatist constituents. The UCP’s peculiar problem is the wide disagreement within its own ranks, particularly with regard to social conservatism versus libertarianism and national independence for Alberta.

This chasm saw the rise of the free-market Wildrose Party, which carried influence between 2007 and 2017 as an alternative to what were then the Progressive Conservatives. The Wildrose Party’s most notable, and unfortunate, achievement was dividing the conservative vote and getting the NDP’s Notley elected as premier in 2015.

Even one of Kenney’s own UCP members of the Legislative Assembly, Drew Barnes, wants Alberta to have a minister of autonomy, and he has nominated himself. Barnes cites the long-term fiscal imbalance in taxation and the equalization system, in which Alberta has paid in vastly more than it has received. That net loss for Albertans has been a crippling $20 billion annually over the past decade, from a province with under 5 million people.

Kenney is in an unenviable position and taking heat from both sides. A conservative-leaning, Alberta-centric publication has been at the forefront of identifying his shortcomings, and a legal advocacy group is taking the province to court to challenge the lockdowns that are in place.

There is light at the end of the tunnel, however. In Kenney’s own words, rather than the Great Reset, “how about instead we get refocused on generating economic growth, on recreating some of the trillions of dollars of wealth that will have been destroyed.”

Fiscal necessity will dictate a reset that is the opposite of what socialists want: austerity and restructuring. As Peter Holle, president of the Frontier Centre for Public Policy has noted, now is the time to fight for policy driven by outcomes and not utopian central planning.

“If the political leadership is smart,” he writes, “we will see the end of the dismally performing monopoly models of health care and education and a much-needed rethink of universities.” That is just scratching the surface of the spring cleaning that will need to take place.

Fergus Hodgson is the director of Econ Americas, a financial consultancy. He is also a research associate with the Frontier Centre for Public Policy.