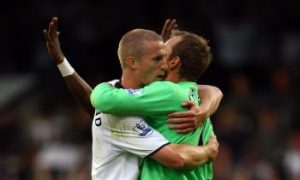 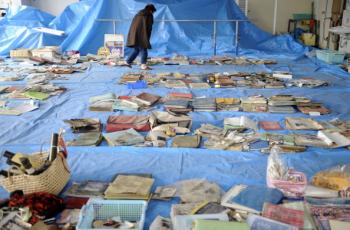 Japan: A survivor checks salvaged memorial pictures and goods on display at a corner of the town hall in Yamada town, Iwate prefecture on March 25, 2011. (Toshifumo Kitamura/AFP/Getty Images)
World

By Helena Zhu
Print
A month and a half after Japan’s devastating March 11 earthquake and tsunami, residents are digging through the debris for mementos and bodies.

With almost 12,000 people still missing, according to the National Police Agency, demolition crews and teams of soldiers are continuing to clear away debris in Japan’s northeast to try and uncover more bodies before the summer heat and humidity arrive.

The cleanup crews are also helping people recover mementos that may have survived the disasters. Before beginning the cleanup in a specific neighborhood, the crews try to inform the survivors from that area so that they can be there to recover belongings.

The search through the rotting debris—although helpful for residents—is slowing down the reconstruction phase that started this month.

Since the disasters, which were deemed the worst in Japan since World War II, more than 90,000 homes have been destroyed or damaged, according to the Associated Press.

As the gloomy atmosphere continues in Japan, the government is concerned that the suicide rate will rise as survivors feel hopeless after losing family members and their homes. Even before the earthquake, tsunami, and nuclear crisis, 30,000 Japanese committed suicide every year. This figure is now expected to increase.