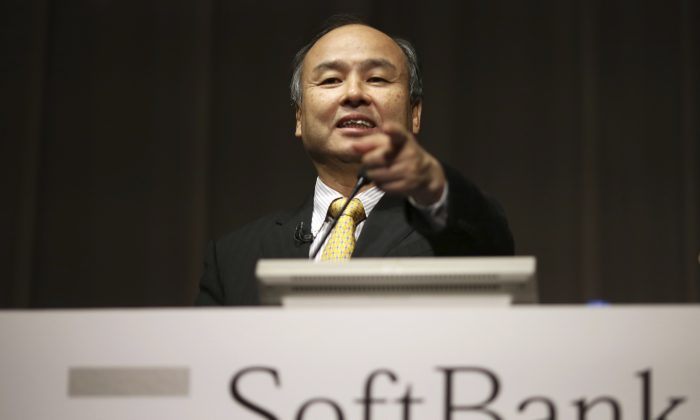 FILE - In this Nov. 4, 2014, file photo, SoftBank founder and Chief Executive Officer Masayoshi Son speaks during a news conference in Tokyo. Japanese technology company SoftBank Group Corp. is buying British semiconductor company ARM Holdings for $31 billion. The agreement, disclosed Monday, July 18, 2016, underlines SoftBank's desire to expand in the Internet of Things, which refers to how almost anything these days has become a computer device that can connect online. SoftBank said ARM has a solid reputation as an innovator in the Internet of Things. (AP Photo/Eugene Hoshiko, File)
Asia & Pacific

Japan’s Softbank to Acquire ARM of UK for $31 Billion

The pound has weakened recently after Britain voted to leave the European Union, making such acquisitions more attractive financially.

SoftBank said its board approved the deal, but ARM shareholders and the English courts still need to approve it. ARM has recommended the deal be approved by its shareholders. SoftBank is seeking to complete the purchase by the end of September, it said in a statement.

“ARM will be an excellent strategic fit within the SoftBank group as we invest to capture the very significant opportunities provided by the Internet of Things,” said Son.

ARM Chairman Stuart Chambers said the agreement will be a plus for the company as SoftBank promised to invest in ARM and double jobs in the next five years.

Cambridge-based ARM, founded in 1990, employs more than 3,000 people around the world, and centers its business on intellectual property, especially in mobile computing, rather than chip manufacturing, for which it relies on partners.

ARM technology is used in 95 percent of smartphones and 80 percent of digital cameras, according to the company. Augmented-reality headsets, biometric sensors, self-driving cars, commercial drones and smart watches all use ARM technology.

SoftBank, a mobile carrier in Japan, also runs a solar-based utility and a humanoid robot business. It has struggled over trying to turn around its U.S. mobile company Sprint Corp., although Son says there is progress on that.

The ARM purchase is the first major announcement from SoftBank after Nikesh Arora, who had joined from Google in 2014, said he was stepping down as Softbank president. Son has always been the chief engineer of SoftBank, and was behind Arora’s appointment, but he has repeatedly said he is trying to groom the next head of the company.