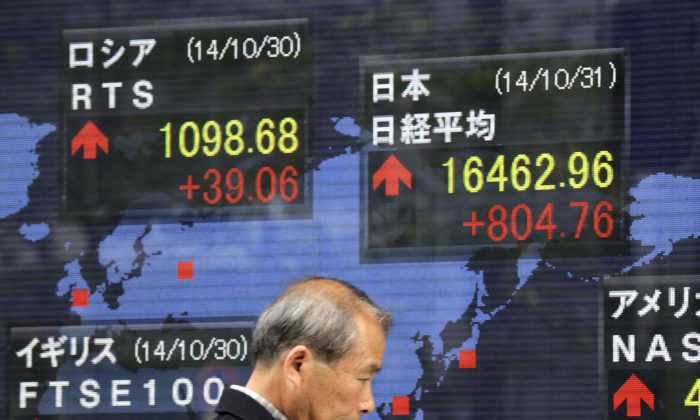 A man walks past an electronic stock board of a securities firm in Tokyo, Friday, Oct. 31, 2014. Japan's Nikkei 225 stock average surged 5 percent and the yen slid against the dollar after the Bank of Japan unexpectedly announced new stimulus to boost a flagging economic recovery. (AP Photo/Eugene Hoshiko)
News

In Japan’s case of monetary folly, we have reached historic dimensions. And if history is any guide, it won’t end well.

Of course, we are talking about the recent move by the Bank of Japan to accelerate its money printing program to buy 80 trillion yen worth of government bonds every year. That’s $702 billion compared to the Fed’s QE3, which totaled $1 trillion in the first year of its inception.

However, Japan’s GDP is only one third the size of the United States, so adjusted for economic output; this program is really much bigger.

But why is this historic? Because we have to go back to Weimar Germany to find a fully developed industrial nation printing money like this.

The Bank of Japan is now monetizing all and more of Japanese bond issuance, similar to what the Reichsbank did in the early 1920s. Interestingly enough, Germany’s debt to GDP, excluding war reparations, was lower at that time than Japan’s staggering 227 percent at the end of 2013.

Like Germany then, Japan is feeling the same effects. A soaring stock market (roughly doubled since Japanese QE started in earnest in 2012) and a crashing currency, down 54 percent against the U.S. dollar over the same period. Yes, foreign investors only lost about half their gains through the currency devaluation, but this is just the beginning.

Despite its spectacular rise in nominal terms, the German stock market actually lost most of its value in real (gold) terms over the period of the inflation, which lasted a bit more than four years. Japan is only two years into its cycle and fortunately doesn’t have a lost war and reparations to factor into its policy.

So looking at the motivation for inflating their currencies, it is to get rid of debt. However, both faced a dilemma that illustrates a big difference in how the two countries carry out this destructive policy.

Germany deliberately crashed its economy to get rid of debt denominated in marks through inflation, and to be in a position to negotiate with the winners of World War I to reduce its war reparations which where denominated in gold and therefore immune to inflation. It did this by physically printing notes and distributing them among the public.

Japan doesn’t have reparations to pay and also has relatively little external debt. However, it cannot literally print enough physical notes to extinguish its gigantic internal debt load in today’s digital banking economy, like Germany did in the 1920s.

It therefore has to issue more debt—the BOJ monetizes government debt in the form of bonds—in order to inflate. This is somewhat ironic and self-defeating, as the more you monetize to inflate away, the more you have to issue.

So Japan might be pursuing a similar strategy than Germany after all. Crash the economy—and it is crashing—with hyperinflation and have a reason to wipe out debt through an old fashioned default.