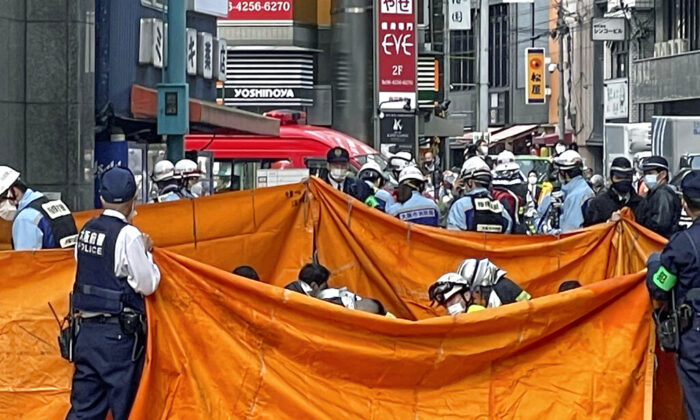 Rescuers attend to victims following a fire at a building in Osaka, Japan, on Dec. 17, 2021. (Kyodo News via AP)
Asia & Pacific

Japanese police are investigating a building fire in the city of Osaka’s commercial district for a suspected arson attack, which has killed at least 24 people, with 4 others injured.

The local fire department received a report at around 10.20 a.m. on Friday that the fire broke out on the fourth floor of an eight-story multi-tenant building in Osaka, where a medical clinic was situated.

The firefighters were able to extinguish most of the flames by 10.45 a.m. and found that there were no fire sprinklers installed in the building, according to Kyodo News.

Earlier on, the fire department had said that 27 people were in cardiopulmonary arrest—a term used in Japan when a death has not been formally confirmed—17 of whom were men and 10 were women, and one was injured.

In the latest report, authorities confirmed the deaths of 14 men and 10 women, which they believe were caused by carbon monoxide poisoning. A total of 28 people were taken to the hospital. All of the victims have yet to be identified.

Citing information gathered from witnesses, police said that a man, who appeared to be in his 50s or 60s, had allegedly brought a paper bag containing a liquid to the clinic and kicked it near a heater, causing a fire to break out as liquid was spilling out of the bag.

Police suspected that the man was among the 28 people who were taken to the hospital, but they have not yet confirmed his current condition.

Japanese Prime Minister Fumio Kishida has extended his deepest condolences to all the victims of the fire.

“A very tragic incident occurred. First of all, we must make efforts to prevent a recurrence by grasping the actual situation and clarifying the cause and circumstances,” Kishida said at a press briefing in Tokyo on Friday.

A similar incident happened in 2019 when a fire broke out at an animation studio located in the city of Kyoto, with over 22 people feared dead and dozens more were injured or missing. Police apprehended a 41-year-old suspect who had allegedly shouted “Die!” while pouring gasoline around the three-story building of Kyoto Animation.

Police later revealed that the fire had led to the death of 33 people, most of whom were workers at the studio, and that the suspect, Shinji Aoba, admitted to setting the fire due to his impression that “[Kyoto Animation] stole novels.”