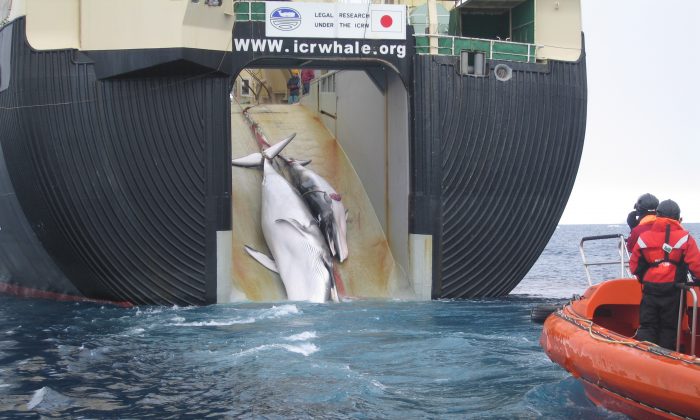 An adult and sub-adult Minke whale are dragged aboard a Japanese whaling vessel in 2008. The photo was taken by Australian customs agents, under a surveillance effort to collect evidence of indiscriminate harvesting. (Australian Customs and Border Protection Service)
International

Japan defied the ruling and sent out four ships on Dec. 1, 2015, saying they needed to kill whales to gain important scientific data.

Of the 333 minke whales killed, 230 were females—of which 209 were pregnant—and 103 were males, according to Japan’s Fisheries Agency.

Japan’s actual catch has fallen in recent years, in part because of declining domestic demand for whale meat. The government has spent large amounts of tax money to sustain the whaling operations.

Conservation group Sea Shepherd, which has had at-sea battles with Japanese whaling ships in previous years, condemned the hunt.

“This is the same pattern we’ve seen for years: Japan simply ignores international law and international opinion, and continues to slaughter whales with impunity, selling their flesh for a profit,” said founder advisor Paul Watson in a Facebook post.

The organization’s managing director in Australia, Jeff Hansen, criticized the Australian and New Zealand governments for not intervening.

The majority of Australians wanted the Australian government to send a vessel to oppose the slaughter. They did not.
— Jeff Henson, managing director, Sea Shephard

Top 10 Places in the World for Whale Watching

Australia and New Zealand have previously been outspoken opponents of Japan’s whaling practices, with Australia introducing the international court case that culminated in Japan being ordered to stop its illegal whaling.

Sea Shepherd itself was unable to send a ship to try and disrupt the whaling due to difficulty in tracking the whalers and lack of a boat swift enough. However, Hansen said the organization will soon have a fast, long-range ship.

Norway and Iceland both kill more whales than Japan; together the three countries kill around 2,000 per year.

According to the International Whaling Commission (IWC), Antarctic minke whales have been protected since the 1986 moratorium, apart from some special permit catches.

“There are several hundred thousand Antarctic minke whales and thus they are clearly not endangered. However, there has been an appreciable decline in their estimated abundance,” the IWC website states.

IWC currently estimates the Antarctic Minke whale population to total around 460,000 to 690,000.

Japan carries out whaling ostensibly as ‘scientific whaling,’ but the International Court of Justice (ICJ) determined its Antarctic whaling was commercial and therefore illegal under the moratorium.

Outrage Over Annual Slaughter of 250 Whales in Faroe Islands

Norway has an objection to the IWC moratorium and has also used scientific permits to boost its whaling, according to the Whale and Dolphin Conservation group (WDC).

Iceland has continued to kill whales despite the IWC moratorium on commercial whaling. It uses loopholes in the International Convention for the Regulation of Whaling (ICRW), and its illegal move to take a so-called ‘reservation’ in 2002.