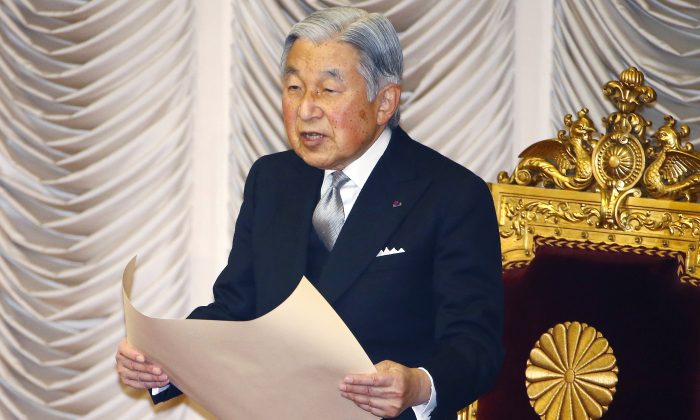 FILE - In this Jan. 4, 2016, file photo, Japan's Emperor Akihito reads a statement to formally open the ordinary diet session at the upper house of parliament in Tokyo. Japan’s public television said Wednesday, July 13, 2016, Akihito has expressed intention to retire while still alive. The NHK says the Emperor has conveyed his hopes to relinquish his title to Crown Prince Naruhito within the next few years. It was not known if there was any timeline for his intended retirement, or whether there was related to his recent health conditions. (AP Photo/Shizuo Kambayashi, File)
International

TOKYO—Japan’s Emperor Akihito has expressed his intention to retire and relinquish his title in the next few years, rather than reduce his duties as he ages, the country’s public television reported Wednesday.

The 82-year-old Akihito in recent years has referred to his old age and admitted to making small mistakes at ceremonies, and the Imperial Household Agency has suggested reducing his duties, while giving more responsibility to Crown Prince Naruhito.

The NHK report said Akihito has been mulling the possibility over the past few years and that his two sons have accepted the idea.

Akihito ascended to the throne after his father, Hirohito, died in January 1989. He had prostate cancer surgery in 2003 and a heart bypass in 2012 but has since recovered.

While abdication is unheard of in modern Japanese history, Akihito has broken with other imperial traditions.

He was the first emperor to marry a commoner, and Empress Michiko was the first who didn’t use a wet nurse for their three children.

Akihito also surprised the nation in 2013 when he chose to be cremated upon his death, with his remains placed in a mausoleum smaller than those of his predecessors, with Michiko’s remains alongside — a plan that will break the imperial family’s burial custom that lasted for 400 years.

Despite his age, the emperor has maintained a busy schedule and attended ceremonies, greeted foreign dignitaries and traveled overseas and around Japan, such as visiting towns to comfort residents following deadly earthquakes.

Akihito has also attempted to soothe some of the wounds from World War II, traveling to China early in his reign and visiting major battlefields. He visited the western Pacific nation of Palau last year, and the Philippines, one of Asian victims of Japan’s wartime aggression, earlier this year.

Naruhito, 56, is his elder son and first in line of succession. Naruhito’s wife, Crown Princess Masako, a former diplomat, is still recovering from a stress-induced mental condition.

The Imperial law does not specify rules about a living succession, including what happens to his post-retirement status. Kyodo quoted unidentified government sources that a succession while he is alive requires a revision to the law.

The last succession from a living emperor was about 200 years ago.

According to the traditional count, Akihito is 125th in a line of emperors that began with Jimmu in 660 B.C. Historical records suggest the throne dates to at least the fifth century, making it the oldest surviving hereditary monarchy.