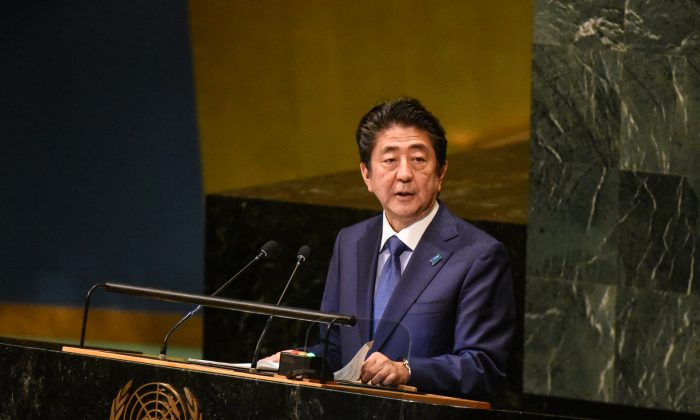 Japan is willing to make concessions to Washington and enter into bilateral trade negotiations in hopes of avoiding U.S. tariffs, as the two sides met for a second round of discussions, according to Japanese media.

On Sept. 25, U.S. Trade Representative Robert Lighthizer met in New York with his counterpart, Toshimitsu Motegi, Japan’s economic revitalization minister. The meeting followed the first talks held in Washington in August, when the negotiators failed to reach an understanding.

After the second-round meeting, Motegi told reporters that they now have a general idea of how to promote bilateral trade.

“We were able to reach a common understanding over the broad direction that things should go in,” he said, according to Japanese news agency Kyodo. The specifics may be announced after the summit between President Donald Trump and Prime Minister Shinzo Abe, he added.

Trump and Abe are scheduled to meet Sept. 26 on the sidelines of the United Nations General Assembly session in New York.

According to Japanese media, Abe would prefer a multilateral trade relationship with the United States under the Trans-Pacific Partnership (TPP). But to avoid additional tariffs, he has caved to Trump’s demands for bilateral trade talks.

“Given our position (close diplomatic relationship), we would have to swallow their demands,” said one Japanese official, according to the Japan Times.

Tokyo is concerned about U.S. tariffs on cars, since the auto industry is integral to Japan’s manufacturing and economy. Automotive exports to the United States are a key source of growth for the country, accounting for nearly 1 percent of its gross domestic product.

Japan may enter negotiations on a bilateral deal if the Trump administration promises to hold off on imposing additional tariffs on Japan’s auto sector, according to Kyodo, which cited another source.

Trump also raised concerns about the trade deficit with Japan and demanded a bilateral trade agreement to address that.

Before holding a working dinner with Abe on Sept. 23 ahead of the U.N. meetings, Trump wrote on Twitter that he would be “talking military and trade.”

“We have done much to help Japan, would like to see more of a reciprocal relationship. It will all work out!” he wrote.

Barriers to US Exporters

The U.S. trade deficit in goods with Japan was nearly $69 billion in 2017, the same as the prior year. And nearly two-thirds of it comes from the Japanese automotive sector.

The Trump administration demands that Japan removes barriers to U.S. exporters, including tariffs and other barriers to entering and expanding in the Japanese market.

According to a report by the Office of the U.S. Trade Representative (USTR), American manufacturers are facing difficulties in accessing Japan’s automotive market. Due to non-tariff barriers that impede access to the market, overall sales of American-made vehicles and automotive parts in Japan remain very weak, states the report.

The non-tariff barriers in Japan include issues relating to certification, standards and testing protocols, transparency, and hurdles in distribution and service networks. USTR claims that these issues combined with other past and current policies have put American companies at a disadvantage.

On May 23, Trump directed the secretary of commerce to launch a Section 232 investigation into whether imports of automobiles and auto parts threaten to harm national security. The investigation may result in tariffs as high as 25 percent on auto imports, which would hurt foreign carmakers.

The outcome of other trade talks, including the North American Free Trade Agreement (NAFTA), may have an impact on the investment landscape, as well. Japanese carmakers are concerned about the fate of NAFTA, as most have supply chains in Mexico and Canada. In the past decade, Mexico has become an important production hub for Japanese carmakers like Toyota, Honda, Nissan, and Mazda.

Trade experts speculate that Abe could make concessions to the United States by offering greater access to American exporters on agricultural goods to avoid tariffs on cars.