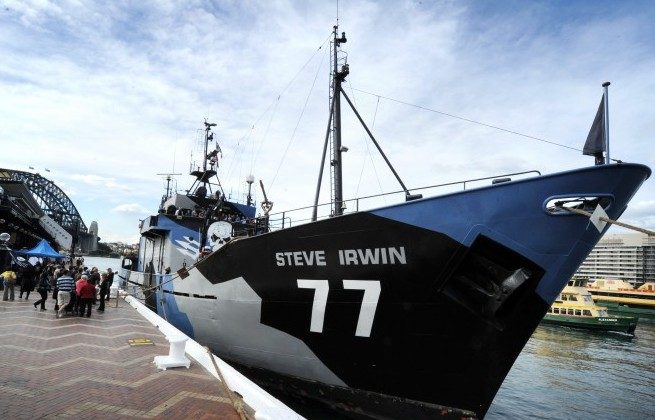 In the Southern Ocean, anti-whaling group Sea Shepherd is again doing battle with the Japanese whaling fleet during its annual hunt. But while trailing the whaling fleet’s resupply ship, Sea Shepherd said it discovered the ship had left “fuel slicks” in Australian waters and claimed one of the whaling vessels had tried to crash into one of the activist group’s vessels.

Sea Shepherd crew said they smelled diesel fumes and saw an oil slick in the wake of the Sun Laurel, a South Korean owned refueling vessel for the Japanese whaling fleet, according to a statement on Sea Shepherd’s website. Later, they collected water samples and will now report the Sun Laurel to local authorities.

Sea Shepherd said it also intercepted a radio transmission between the captain and bosun of the Sun Laurel, saying that “if in case oil drops,” there would be a “big problem.” The captain added that the Sam Simon, one of Sea Shepherd’s vessels, might “catch” it.

James Brook, a crew member of the Sam Simon, said he interpreted the captain as saying that the Sam Simon “caught” the Sun Laurel dropping oil into the water. “He just told the bosun to make sure the oil cover is closed,” Brook said.

Sea Shepherd said the Sun Laurel’s oil dumping violates the international MARPOL convention that bans the dumping of oil or oily mixtures near the Antarctic area.

“We have been pursuing the Sun Laurel all night and they have been operating at very unsafe speeds, in extremely dangerous conditions with icebergs and poor visibility,” Capt. Luis Pinho of Australia onboard Sam Simon said in a statement.

Several times, Pinho and his crew said they could smell diesel from the vessel ahead. “We collected samples that we have onboard which exhale an odor of oil. We are very concerned, for an oil spill in these pristine Antarctic waters would have a catastrophic effect on the Antarctic wilderness,” Pinho’s statement reads.

“I judged that this collision would be of high risk to the hull integrity of the Sam Simon, with the reinforced bow of the Yushin Maru imminently coming into contact with our portside stern at high speed,” Sam Simon Capt. Luis Manho said. “While this was happening, the armed security ship, the Shonan Maru No. 2, was also very close to us and acting aggressively, coming within .08 nautical miles of our bow.”

In a separate incident, Japanese officials told Japanese news agency Jiji Press Friday that Sea Shepherd attempted to obstruct its whaling vessels in the Southern Ocean for the first time this year.

The Japanese Institute of Cetacean Research, which says its whaling program is for scientific purposes, said the obstruction took place late Friday when another Sea Shepherd ship, the Bob Barker, came within 55 meters of the Nisshin Maru mothership and the Bob Barker’s crew members tried to throw ropes on the propellers and helm.

On Saturday, Sea Shepherd claimed it was able to shut down all whaling operations that day.