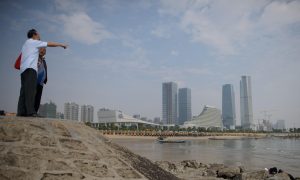 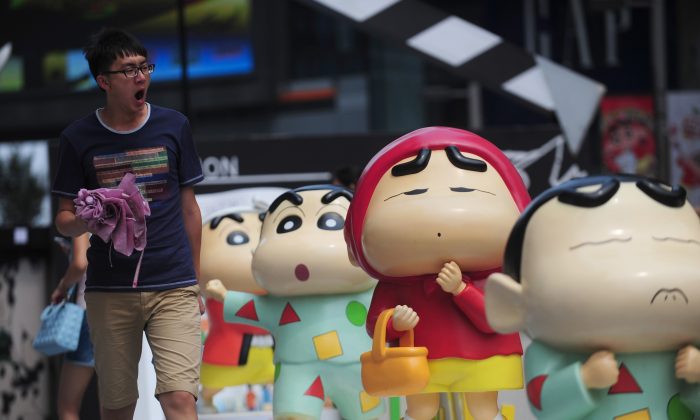 A man walking by sculptures during a Crayon Shin-chan exhibition in Shenyang, northeast China's Liaoning province on This photo taken on July 11. (STR/AFP/Getty Images)
Business

Yes, you read that correctly. The Economic Intelligence Team at the Daiwa Institute of Research put out a report saying the “most likely” scenario for the Chinese economy is a shocking minus 20 percent GDP growth later in this decade.

“It is not an overstatement to point out that this is of the utmost concern for those involved in the global financial markets,” it states in the report.

While most people know that China has created a huge debt bubble and misallocated most of the funds from it, Daiwa has calculated some numbers to quantify the problem and they don’t look pretty.

The report supports the current narrative that China has channeled too much money into infrastructure spending, much of which is not generating the required return.

And while the analysts give the regime in China some leeway to manage an economic downswing, the large number of bad loans from bad investments in the system eventually will be too much to handle. “China is still likely to be faced with the threat of a financial collapse,” states the report, even if the central government intervenes.

The bottom line, China has consumed vast amounts of resources, driving up the price of coal, iron, steel, and oil during the boom years, and translated it into excess capacity, driving down the selling prices of these goods.

If there was genuine value creation and genuine demand, the prices of the goods sold should have gone up, not down.

“China has continued to depend on the accumulation of capital mainly from public spending to maintain a high economic growth rate, and as a result, this has done more harm than good to technological advancement,” reads the report.

According to Daiwa, this waste of resources and inefficiency in the use of capital and labor will lead to a massive adjustment—downward. In the best case scenario, this means 4 percent growth for capital spending (rather than 10–20 percent in the last decade) and zero percent GDP growth. However, this is not the most likely scenario.

“Of all the possible risk scenarios the meltdown scenario is, realistically speaking, the most likely to occur,” the reports states without sugarcoating.

Even though the researchers didn’t want to put it into words, the minus 20 percent growth at around 2017–2018 is clearly represented by the green charts in the lower right diagram of the following chart series.