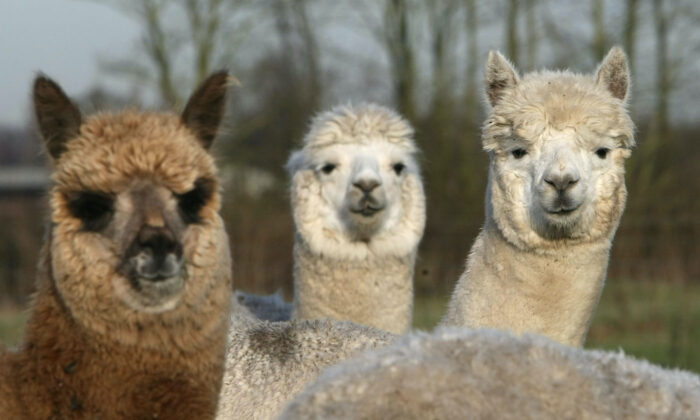 A file image of several alpacas grazing on a field. Alpacas are part of the camelids family and originate from the Andes. (Christopher Furlong/Getty Images)
Science News

Researchers in Japan have found two types of antibodies derived from alpacas that are effective against all SARS-CoV-2 variants.

The derived antibodies from the South American animal are expected to be put into practical use within the next two years.

The researchers are from Kyoto, and they published their research in the journal Nature on July 6.

Antibodies are proteins used by the immune system that bind to pathogenic viruses and bacteria so that they cannot bind to our cells. Alpacas have significantly smaller antibodies than humans and the researchers believe that their nanobodies (a single-domain antibody)  bind to SARS-CoV-2, the virus that causes COVID-19, easier than human antibodies.

It was discovered that out of the antibodies of alpacas, six types could easily bind to SARS-CoV-2 and two among them, when fused together, are effective against all SARS-CoV-2 mutant strains apart from the new Omicron BA.5 variant that hasn’t been tested yet. But the team said they are confident that the nanobodies will be effective for this variant as well.

Researchers tested the potency of five clones (C17, P17, P86, C116, and C246) for the Alpha, Beta, and Delta variants of the virus. Results showed that “the P17, P86, and C116 clones more potently neutralized the Alpha variant… the P86 and C246 clones significantly suppressed the Beta variant; and P17 and C246 suppressed the Delta variant.”

Also, the research found that C246 cannot neutralize the virus even at the highest concentration tested, but P86 can suppress the authentic Omicron BA.1 variant virus. P17 can neutralize the Delta variant and P86 can neutralize the Beta variant. Scientists said that P86 was the most potent clone because it is “small enough to access the hidden cleft that is not recognized by human antibodies”.

Professor Akifumi Tokaori of Kyoto University told Sankei Shimbun on July 14 that they will begin clinical trials of the antibody cocktail next year and aim to have it ready for practical use within two years.