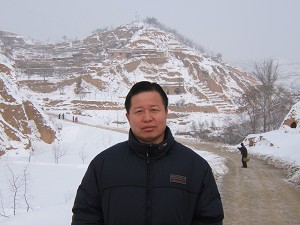 TOKYO—Following Chinese communist regime's announcements that restrictions will be relaxed for overseas reporters, a Japanese reporter in Beijing made attempts to interview the famous human rights attorney Gao Zhisheng. However his interview was obstructed by the authorities with the excuse that Gao Zhisheng is “different from ordinary Chinese citizens.”

Japan's Sankei Shimbun reporter in Beijing later published a report on the Internet explaining his attempt to interview the famous lawyer.

At noon on January 16, after searching for some time, the reporter finally succeeded in finding the apartment building that Gao Zhisheng lives in. However, as soon as he stepped into the building and approached Gao's aparment, he was stopped by four men. The men interrogated the reporter and demanded him to go away. According to the reporter's web-published report, the men, who were all public security personnel, had even set up beds inside the building so they could monitor Gao and people who entered the building 24-hours a day.

Later the public security staff ordered the reporter to enter a “monitoring room” set up by the authorities in front of Gao's residence. After the reporter entered the room, he saw a plain-clothes man get up from a bed. The reporter identified himself and explained he was there to interview Gao Zhisheng. The plain-clothes man asked him repeatedly, “Are you really Japanese? What are you here for? What do you want to ask?”

The reporter then asked why he wasn't allowed to interview Gao and what law prevented him from conducting the interview. In response, the plain-clothes man said, “It is impossible [to interview Gao.]”

He added, “You need permission.” The reporter countered by saying that the Chinese authorities have relaxed the policy for foreign reporters. The person replied, “He is different from ordinary citizens” and ordered the reporter to leave.

The report mentioned that Gao Zhisheng is dedicated in his rights-defending activities. Gao sent public letters to the high-ranking leaders of the Chinese Communist Party (CCP) last October to call on them to stop the persecution of Falun Gong practitioners. At that time his law offices were forcibly closed down; he has since then been suppressed and constantly monitored. On December 22, 2006 Gao was convicted of “inciting subversion of state authorities” and sentenced to three years in jail plus five years probation. However, the authorities, seemingly to avoid international condemnation, released Gao on the same night and put him under house arrest.

The report said that after Gao's case was exposed to the media, the issues he had spoken out about such as the Chinese regime's forced acquisition of land from farmers, unfair treatment of workers, and persecution of Falun Gong practitioners have started to receive more attention around the world, and so the CCP has increased its control on Gao's activities.

Because Gao is being tightly monitored, there is not much known about him since he has been under house arrest.

Recently, Beijing authorities announced that from 1 January 2007 until the end of the 2008 Olympic Games, restrictions on foreign reporters' interviews in China would be relaxed. The officials said that reporters from foreign countries and Hong Kong would not need authorization from the usual units or the local foreign affairs offices prior to conducting an interview.

After CCP's announcements, Reuters successfully contacted and interviewed Bao Tong, former secretary to the former General Secretary of the CCP Zhao Ziyang, which led some people to believe that the restrictions were truly loosened as promised.

However, some rights activist and people who have suffered persecution by the Chinese communist regime are calling the announcements an “empty promise”. A Beijing human rights activist, Hu Jia, has said that the Chinese laws, including the Consitution, are not respected or enforced in China. Hu said that Chinese authorities have made many empty promises, and he wasn't optimistic that there is much truth to their new announcements.