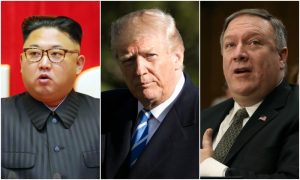 While Trump and Abe spent a day in meetings at Mar-a-Lago in Florida, reports surfaced that North and South Korea are negotiating a peace treaty. Trump also hinted on Tuesday and confirmed on Wednesday that his nominee for the top U.S. diplomatic position, Mike Pompeo, met with North Korean dictator Kim Jong Un last week.

Abe praised Trump’s “unwavering conviction” in “addressing the issue of North Korea.” Abe specifically pointed to Trump’s military posture as the factor that brought about “major change” on the Korean Peninsula.

“The United States has the overwhelming military power in the world. And by using this strength, you have been effectively applying the overwhelming level of pressure against North Korea,” Abe said. “And this, actually, successfully led to the outcome that we have already observed.”

South Korean President Moon Jae In has also credited Trump for the progress in relations with North Korea after Pyongyang agreed to meet earlier this year with representatives from Seoul to discuss the potential of sending athletes to the Winter Olympics. That meeting led to a series of developments which ultimately resulted in next week’s summit between the two Koreas and the meeting between Trump and Kim, which is expected to happen in May or June.

Kim didn’t budge until early this year when he sent delegates to meet with South Korea about participating in the Winter Olympics. Pyongyang ended up sending a large group of athletes, cheerleaders, and diplomats to the Pyeongchang Winter Olympic Games. Kim’s sister, Kim Yo Jong, attended the opening ceremony and met with Moon.

Moon received an invitation for a summit in North Korea but sent diplomats instead. Those diplomats then personally delivered to Trump an offer for a meeting with Kim, which the president accepted.

Trump is a vocal critic of communism and has used the stark difference between the two Koreas to illustrate the failure and danger of communism. North Korea has been crippled by decades of communist rule with the vast majority of its population living is destitution. Meanwhile, South Korea has prospered.