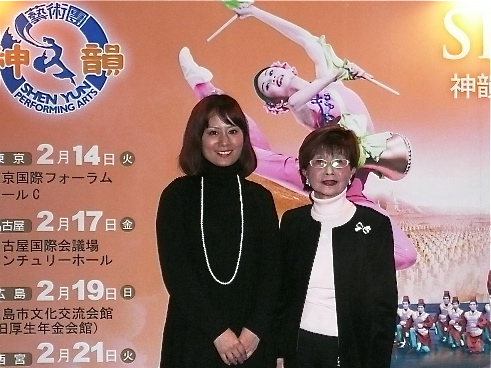 NISHINOMIYA, Japan—Eighty-five-year-old oil painter, Junkto Ito, and violinist, Tamaki Gishino, were among the audience at Hyogo Performing Arts Center, where Shen Yun Performing Arts put on its last performance in Japan on Feb. 21.

Even though seeing Shen Yun for the first time, Mrs. Ito felt a deep connection with Chinese culture as she has been a regular at Chinese opera for 60 years. She had longed to see the New York-based Shen Yun since purchasing a ticket to the show last year. Unfortunately, the show was cancelled due to the devastating March earthquake. This year, Mrs. Ito was ecstatic she would finally see it.

“The performance was superb. I will be back next year,” she said, then introduced the young lady standing next to her, violinist Tamaki Gishino, who said she will be back to see Shen Yun next year.

Meanwhile, Mrs. Ito had written on the feedback form: “To sum up, it is truly outstanding. The performance was extraordinary. The dancing was brilliant. I was in awe by the tumbling and other [dance] techniques. The performers must have trained arduously.”

She further said: “Every single piece was wonderful. The dance included many different techniques. The tumbling with the male dancers, the gracefulness with the female dancers, everything was so awesome. The live orchestra not only had violin, but also erhu. The combination of Eastern and Western instruments was incredible. Finally, the female conductor was outstanding.”

The smiles on the faces of the young performers deeply touched Mrs. Ito. She commented: “Do you know, my back was hurting, but now, after watching Shen Yun, the pain is gone.” She also repeatedly said, “I will be back for another performance by Shen Yun.”

Mrs. Gishino likewise had wonderful things to say about Shen Yun. She said: “It was phenomenal. The live orchestra was exceptional. The singing was incredible. Even in such a huge hall, the voice was still very strong and powerful. It was very impressive.”

As a violinist, she was especially interested in the erhu solo performance. “The stirring melody with such deep meaning was so elegant, so astounding. The graceful music reverberating in the hall was so relaxing. I was amazed by such music without the use of microphone, very impressive. The live orchestra gave people such a wonderful feeling.”

The erhu is an ancient two-stringed Chinese instrument commonly described as a Chinese violin.

‘The sound of erhu is very close to human voice’

After watching the show, together with his wife, Mr. Nobuhiko Kubo, president of a local Rotary Club, told the reporters, “Many programs enhanced our belief in Gods and Buddhas.”

As mentioned by Mr. Kubo, New York-based Shen Yun Performing Arts, established in 2006 was composed of many overseas Chinese artists with the objective of reviving traditional Chinese culture. Its programs are mainly based on traditional belief in Gods and Buddhas.

As the main objective of the Rotary Club is also providing service to the society, Mr. Kubo said, “The belief in Gods and Buddhas are also related to etiquette and morality.”

When it came to the program depicting Falun Gong practitioners’ steadfastness in their belief under the cruel persecution in mainland China, Mr. Kubo stressed that, “Freedom in beliefs should exist, and all the bondages shouldn’t exist.”

As a music lover, Mr. Kubo especially appreciated the performance of erhu. He commended, “I really wish two or three pieces could be performed. The sound of erhu is very close to human voice, which gives people the feeling of closeness, and makes people feel particularly relaxed.”

Commenting on the program, Mrs. Kubo said, “The heads of performers always keep in a parallel position, while their feet are moving like the flow of water. It is indeed amazing. You can tell all of them have the solid foundation of classical Chinese dance skills.”