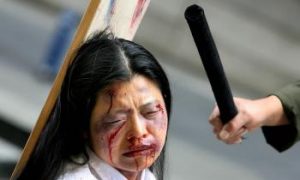 Evidence of Torture Hidden From Journalists in Beijing
0
World

Japan’s local governments are a lot less sure they want their communities to live near nuclear power plants than before the Fukushima crisis. In a recent poll by Kyodo News, out of 46 local governments, 19 said they are undecided about whether to condemn or embrace existing or planned nuclear plants in or near their jurisdictions.

A Kyodo News poll published Saturday shows that the governments want further public and government input, before taking a decided stance on the plants.

Thirty-seven percent of local governments said they would allow nuclear plants to continue to operate, as long as certain conditions are met.

Only one government said Japan’s nuclear plants should be decommissioned, according to The Mainichi Daily News.

DPJ fared poorly in elections two weeks ago, mainly over Kan’s handling of the nuclear crisis. Calls for Kan to step down, after the crisis is stabilized, have increased, including calls from DPJ members.

On Sunday, DPJ members ran for 10 mayoral and ward chief positions in the elections. The outcome of these elections will affect Kan’s standing within his own party, according to the report.

The government is struggling to come up with the funds needed for the initial phase of reconstruction and cleanup from the natural disasters, including stabilizing the damaged Fukushima Daiichi nuclear plant.

Kan is expected to draft a second supplementary budget to fund the reconstruction, which began this month. Government officials said that the budget could amount to more than 10 trillion yen (US$122 billion), which would compel the government to issue new debt to pay for it, Kyodo News reported.

To handle the aftermath of the 9.0 magnitude earthquake, which was deemed the worst crisis in Japan since World War II, Japan’s first extra budget is already bigger than the three special budgets effectuated after the 1995 Kobe earthquake, which totaled 3.23 trillion yen.

Workers cleaning up the damaged Fukushima plant are being exposed to increasingly higher levels of radiation with 30 workers having been exposed to 100 millisieverts of radiation, the Mainichi reported.

With additional reporting by June Kellum