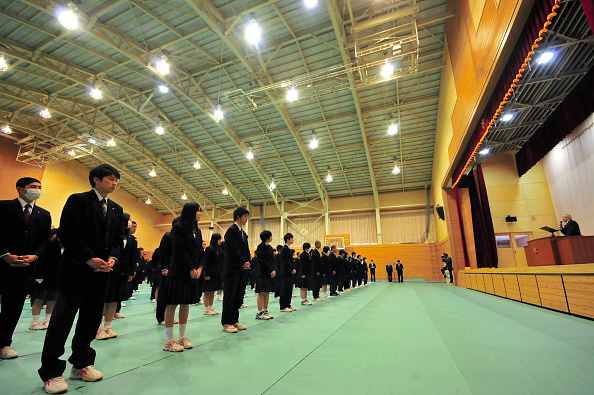 Recently, a private high school in Japan has caught the attention of Japanese and Chinese netizens alike: its students sang China’s national anthem at a ceremony marking the start of a new semester. The principal also addressed students in Chinese during the ceremony.

Japanese broadcaster NHK reported on April 24 that a private high school in Ebino City, Miyazaki Prefecture in Japan has been recruiting students from China for more than a decade, owing to low enrollment rates among locals.

Now, the school has 167 Chinese students and only 16 Japanese students, about a 9:1 ratio, according to the report.

During the ceremony, the school asked the Chinese students to stand up and sing the Chinese national anthem, entitled “March of the Volunteers.”

The song originated from a 1935 Chinese leftist film, “Children of the Storm.” It was a military march that encouraged and praised Chinese soldiers to fight against Japan following the Manchurian Incident, an event that precipitated the Japanese invasion and occupation of northeastern China in 1931.

NHK reported that many Japanese high schools are losing students due to the nation’s declining birth rate. In 2017, the number of births in Japan dropped to the lowest on record since 1899, at about 941,000 new babies, four percent lower than 2016. Some schools have thus begun to actively recruit students from China.

Anne Allison, a professor of cultural anthropology at Duke University, cited economic insecurity as a primary reason for this phenomenon. With a lack of good job opportunities, more and more young people choose not to get married and establish families. One in four men and one in seven women will have never married in their lifetime, according to a 2015 national census.

The Ebino high school principal told NHK they are facing operational difficulties. “China is the nearest country to us. If we can attract Chinese students to study here, the school can keep operating.”

To attract Chinese students, the school has changed its curriculum to becoming more exam-oriented, similar to the education system in China. The changes have yielded promising results; for seven consecutive years, 100 percent of high school seniors have graduated and were accepted into colleges. Many of them entered prestigious Japanese universities, such as the University of Tokyo and Waseda University, according to the NHK report.

Due to the low birth rate, the population of youth is declining in Japan. Local high school enrollment rates in Miyazaki Prefecture, for example, have dropped to 35 percent over the past 20 years. Based on the current trend, the total Japanese population will fall by 22 percent by the year 2048.

According to the report, the population of foreigners living in Japan has increased in recent years, reaching 2.56 million—a large percentage of which are international students.