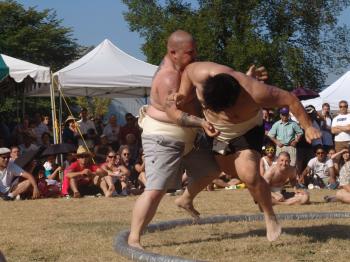 Japanese Festival Mixes It Up

Ryan Moffatt
Ryan Moffatt is a journalist based in Vancouver.
View profile
Follow
biggersmaller
Print
Origami cranes hang from trees in Vancouver’s Oppenheimer Park for the annual Powell Street Festival, the largest Japanese festival of its kind in Canada. Now in its 34th year, the festival is a cross-cultural mix of traditional and modern art and music.

The two-day event, held on July 31 and Aug 1, turns the district known as Japantown into an extravaganza of food, music, martial arts, and much more, where elegant kimonos and wooden shoes mix with shorts and sandals.

What was once a small festival with humble roots has become one of the most unique and long- running annual summer events in Vancouver. There is plenty of traditional Japanese fare but the festival has grown to integrate some of Vancouver’s diverse culture into its mix.

“I think one of our main successes is the fact that we’re very inclusive, and while we do celebrate Japanese-Canadian history, arts, and culture, we try to represent it in all its realms. We also open up our doors to everybody,” says festival general manager and programming director Kristen Lambertson.

“We also commission work where we have Japanese-Canadian artists, and often we try to have not only interdisciplinary performances but also cross-cultural exchanges,” she adds.

“For example, this year we commissioned Katari Taiko which is a Japanese Taiko drumming group to create a new body of work with Mario Zetina, who is a Latin percussionist.”

The main stage supports a variety of different acts throughout the two days. Some combine the traditional with the modern, a-la Rhythm Clash—the fusion of traditional Taiko drumming by Total Constructive Interference with the electronica of Chinese-Canadian hip hop group, No Luck Club.

Others acts include simple and elegant dance demonstrations from Japan’s past. It all works to make the festival an interesting and inclusive event.

This year organizers took the Powell Street Festival beyond the park borders and integrated local community and businesses into the event.

“We’ve invited different organizations and businesses that currently exist on the 300 and 400 block of Powell Street to open up their doors,” say Lambertson.

“So this is the open-door project that we, as well as the Japanese Canadian National Museum, have been working on. We invited these businesses and organizations to open their doors and invite people in to see what they’re actually doing currently, but also for people to see what has been in those buildings historically.”

Displayed are visual panels displaying photographs of the past as well as text explaining the history of some of the families or the businesses that were once there.

Aikido and Shorinji Kempo demonstrations showcase the long tradition of Japanese martial arts that continue to grow and thrive in Vancouver.

A big highlight of the festival is the annual Sumo competition where over 30 participants wrestle and try to throw their opponent out of the ring. The competition is also open to the inexperienced stout-of-heart who wish to take their first Sumo lesson in front of a crowd.

Both traditional and unconventional Japanese food is available, including the popular Spam sushi, a new take on sushi that was first developed in war-time Hawaii. Ikebana flower arranging and Bonsai tree making are just two of the ancient customs on display.

The festival is held in Vancouver’s Downtown Eastside, one of the most historical yet challenged neighbourhoods in the city—a district that is often dismissed as a less than desirable place to visit. Despite—or because of this—a strong sense of community pervades the area.

“It’s a site for people exploring a new way of envisioning the Downtown Eastside who might not be so aware of what it’s like down there, and it’s a great way for people who are not familiar with the area to come down and see that there’s a lot happening there,” says Lambertson.