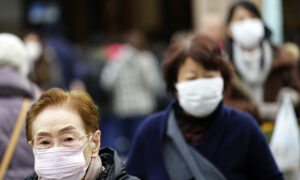 Patient in Japan Confirmed as Having New Virus From China
0 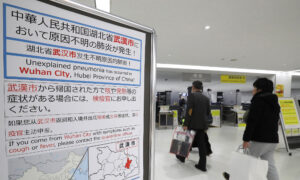 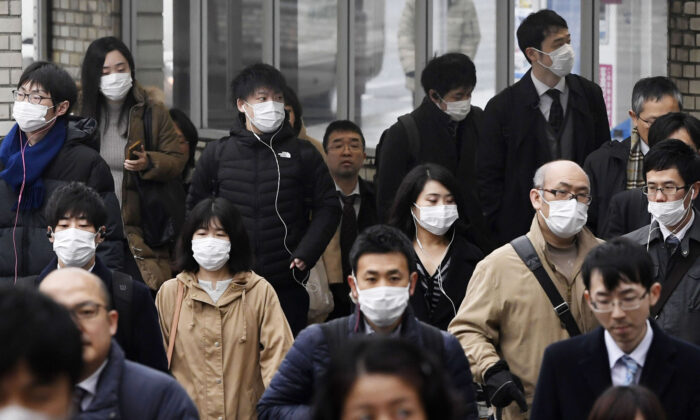 TOKYO—The first group of Japanese evacuees from a virus-hit Chinese city arrived in Tokyo on Jan. 29, a dozen of them with cough and fever including two who were later diagnosed with pneumonia.

Five of the 206 evacuees were taken to designated Tokyo hospitals specializing in treating infectious diseases, Prime Minister Shinzo Abe told a parliamentary session, adding that they were still checking if any passengers were ill with the virus.

Two who had pneumonia were not yet linked to the new coronavirus, Tokyo city officials said. All five patients, being treated at two Tokyo hospitals, were stable, hospital officials said.

Later on Wednesday, seven other evacuees who cleared an earlier screening on board were also found to have coughs and fever in a secondary screening and were hospitalized, the Ministry of Health, Labor and Welfare said in a statement. The remaining evacuees who had no symptoms were taken to a hotel where they will be quarantined.

Japan’s government sent a chartered flight to pick up the evacuees, most of whom resided close to the Wuhan seafood market linked to the first cases of the new virus that has infected scores of people.

“We were feeling increasingly uneasy as the situation developed so rapidly when we were still in the city,” Takeo Aoyama, an employee at Nippon Steel Corp.’s subsidiary in Wuhan, told reporters at Tokyo’s Haneda airport while he waited for a bus to take him to a hospital for another health check.

“My uneasiness peaked when the number of patients started to spike,” he said, wearing a mask that muffled his voice. “I fell asleep as soon as I sat down on my seat (on the plane),” he said. Other evacuees seated near him also seemed relieved but tired.

Japan has eight confirmed cases, including what could be the country’s first human-to-human infections, a tour bus driver who served two groups of Chinese tourists from Wuhan on Jan. 8-16, and a tour guide who worked on the same bus.

Officials said about 650 Japanese citizens and their families in Wuhan and elsewhere in Hebei Province had sought to return home. Aoyama said there are more than 400 others still in Wuhan, including those working for a Japanese supermarket chain that has stayed open to serve customers who need food and other necessities and supplies.

He said it was important to step up preventive measures in Japan, but “I hope we can also provide support for the Chinese people, while we also help Japanese people who are still there.”

Another evacuee, Takayuki Kato, said that all those wishing to leave Wuhan had submitted their health inquiry form and had their temperature taken before departure. While on board, a doctor came to each passenger to take temperature again and check their condition, he said.

Kato said he did not panic as he was able to monitor news online and via local media, but “I was shocked when all transportation systems were suspended. That’s when the situation drastically changed.”

Aoyama and Kato, along with the rest of the evacuees who were not showing immediate signs of infection, were expected to be taken to the National Center for Global Health and Medicine for further checks and a virus test.

Health officials said that evacuees will be sent home on chartered buses to keep them from using public transportation and stay home for about two weeks until their virus test results are out, though it’s not legally binding. Others who need to travel long distance home are asked to stay at designated hotels.

Abe’s Cabinet designated the new coronavirus as an infectious disease on Tuesday, allowing hospitalization and treatment of the patients compulsory, but the measure is taking effect Feb. 7 because of the required 10-day notification period, causing concerns that it may be too late.

Foreign Minister Toshimitsu Motegi told the parliamentary session on Wednesday that the government would have to send two more flights to evacuate the rest of the people wishing to return home.

Japan’s government said it will send another chartered flight to evacuate the others later on Wednesday.