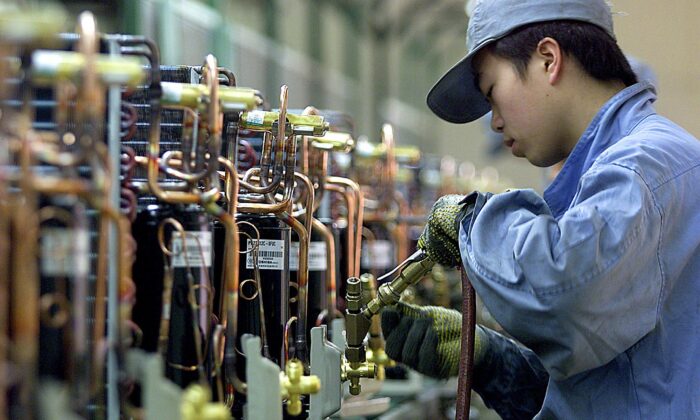 The prolonged lockdown in Shanghai has taken a heavy toll on the operation of foreign companies. Most Japanese factories in Shanghai came to a standstill and the problem spilled over to domestic Japanese manufacturers that have halted production due to a lack of necessary spare parts.

Roughly 63 percent of Japanese factories in Shanghai are idling due to strict lockdowns over the city that drag on the supply chain, said a survey released on May 5 by the Shanghai Japanese Commerce & Industry Club, according to Japan-based media Nikkei on May 6.

Survey responses from the 54 Japanese companies with factories in Shanghai showed that with 63 percent suspending operations and the others operating at less than 30 percent capacity, 91 percent of the Japanese companies are  significantly impacted by the Shanghai lockdown.

Honda Motors April output of its Suzuka Factory in Japan was reduced by half of its usual rate, according to Nikkei.

Daihatsu Motor Co., Ltd. (Daihatsu) announced on April 28 that it was unable to purchase enough parts because of the lengthy lockdown in Shanghai and with a shortage of semiconductors, there was an extended factory shutdown during Golden Week, a Japanese national holiday that runs from May 3 to May 5.

Currently, several Daihatsu factories in Japan are on extended holiday until May 11, including the plant headquarters in Ikeda, Osaka Prefecture, two plants in Nakatsu, Oita Prefecture, and the plant in Ryuou-cho, Shiga Prefecture, that was previously shut down. In addition, the plant in Kyoto was scheduled to be closed from May 18 to 19, according to the Chinese edition of Nikkei on May 1.

In the face of a machine parts shortage, construction crane manufacturer Tadano’s two factories in Kagawa Prefecture also ceased running until May 13.

Mr. Ishii, an employee of Toyota Motor Sales in Japan, told The Epoch Times, that the spring vacation is exceptionally protracted because of the chaotic supply chain, “the factories are experiencing a staggered closure as they don’t know when to resume normal operation. This directly affected the lives of Japanese people, who are undergoing pressures from soaring energy costs and prices, yet wages remain stagnant,” Mr. Ishii said.

“It is really terrifying, China’s zero-COVID policy, how can a megacity [like Shanghai] possibly be sealed off?  Incredibly disrupting production for so long and the economy will be deemed to be seriously affected even if the city unlocks itself in the future,” Mr. Ishii said.

‘Resuming Work and Production’ Is Just for Show

A disruption in the logistics network makes procurement of raw materials, components, and finished products, which are required for resumption of factory operations, unachievable.

Although Shanghai authorities have recently proposed they will resume work and production, it seems to be just for show for the public.

But the start-up data compiled by the authorities is falsified and cannot reflect the actual situation, said Song He (a pseudonym), manager of a factory in the Pudong district of Shanghai, a manufacturing and supply hub.

“Once the factory signs the commitment, then it will be incorporated into the data [recorded] as resumption of production even if it failed to restart due to lack of employees or raw materials,” Song told The Epoch Times.

The Chinese Communist Party wanted data to tell the public, regardless of its accuracy. The fact is that most of the employees were isolated at home and unable to return to work at all, Song said.