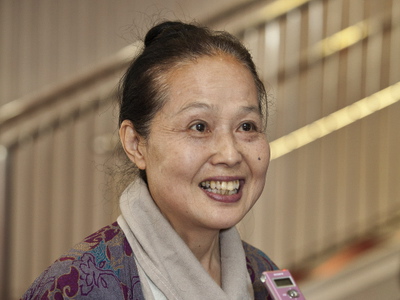 Ms. Hisayo Hama, a Japanese dance performer, was one of them. She said with a big smile, “We don’t have performances like Shen Yun in Japan. I am indeed fortunate to be able to see such a program. The performers transferred those touching [stories] into art and presented them to the audience. It is touching and inspiring.”

Ms. Hama showed her great admiration for Shen Yun’s efforts to recover the divinely inspired culture. “I worship the divinely inspired culture very much. That’s why I came to see the show. Ordinary Japanese people, like me, worship gods. Only because of the blessings of gods and our ancestors can we safely live until now. So I came to see the show in a sublime mood, and I was very touched.”

Michiko Hama, Ms. Hama’s daughter, who is a performer of Western musical instruments, particularly enjoyed listening to the Shen Yun Orchestra. Having never before heard a combination of Western and Chinese musical instruments, she said it was “very innovative.” “It was astounding. I had never listened to such music. It was just wonderful. I feel very happy for seeing the show!”

Ms. Hisayo Hama said, “When we told our friends yesterday that we were going to see the performance today, everyone said, ‘Wow! It’s really great!'”

She was moved by the last program, Divine Mercy, saying, “It was magnificent. I can’t express my feelings with words. I believe that gods will make people strong and resolute.”

She said that she hoped China would “go back to its original real look [like what was presented in Shen Yun]. China is not a country without these [good cultures]. I hope through Shen Yun’s efforts, China will make some changes in the future.”

Both mother and daughter were inspired by the song lyrics sung by Shen Yun’s solo vocalists. They felt delighted when reading the Japanese translation of the lyrics in the program book,

“Don’t be blinded by money and riches
After a lifetime you leave empty-handed, all in vain.”

“I think Japanese people also need it [the meaning behind the songs],” Ms. Hisayo Hama said.