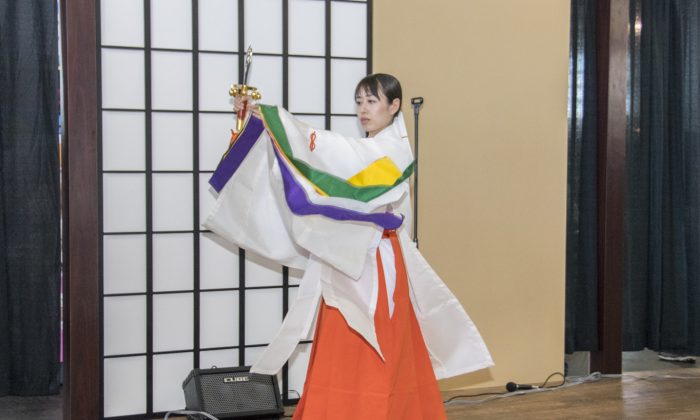 SAN FRANCISCO—The eighth annual Japanese Cultural Summit (J-POP) was held in San Francisco over the weekend of July 22–24 at the Fort Mason Center for Arts and Culture. The popular festival showcases a broad sampling of Japanese culture, including fashion, music, food, art, and tech innovations.

While many of the festival’s participants shared the latest innovations in Japanese life, traditional disciplines were also exhibited. Attendees were able to witness a classical Japanese tea ceremony as well as watch a presentation by former sumo wrestler Deruki Tsurugidake.

Sumo wrestling is one of the oldest martial arts in Japan. Believed to date back 1,500 years, the earliest matches were dedicated to the gods as prayers for a good harvest.

Tsurugidake gave a demonstration of traditional sumo techniques to a spellbound crowd. Dressed in a kesho-mawashi (a fancy loincloth worn only by the strongest wrestlers), his performance delighted onlookers, some of whom even got into the ring to try their luck against the powerful man.

Now the owner of a popular hotel in Chichibu, Japan, Tsurugidake related to the crowd how he was taught the art of sumo from a very young age by Musashimaru, a Hawaiian master. He was grateful to his teacher for not only showing him how to wrestle, but also for teaching him through his own example how to be a kind and caring person.

Another traditional exhibition showcased at J-POP was the Art of Chanoyu, or, as it is more commonly known, the Japanese tea ceremony.

The most important goal of the Japanese tea ceremony is for participants to serve a bowl of tea with a pure heart, something that can take years to master.

Dressed in traditional Japanese kimonos, members of the Urasenke Foundation of San Francisco enchanted the crowd with the beauty and grace of a classical tea ceremony.

According to the Foundation, the most important goal of the Japanese tea ceremony is for participants to serve a bowl of tea with a pure heart, something that can take years to master.

They believe the ceremony is also a powerful way to learn how to behave politely and harmoniously in society, serving to bring a sense of awareness to how our behavior affects those around us.

The Urasenke Foundation offers classes of all levels to those interested in learning the art of Chanoyu.

Steve Ispas contributed to this report.