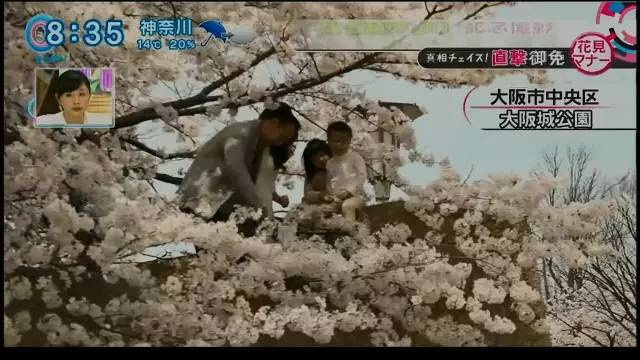 Chinese tourists climb on top of a wall to have their pictures taken with cherry blossoms. (Hexun.com)
China

A Japanese television station recently cast a spotlight on another instance of badly behaved Chinese tourists.

In a recent program titled “The Chinese Way of Enjoying Flowers,” several guests on a Japanese television show discuss the behavior of Chinese tourists who traveled to Ueno Park in Tokyo and Osaka Castle Park in Osaka during the Cherry Blossom season in Japan.

According to the Japanese television program, some Chinese tourists had climbed atop a high wall to get pictures of themselves surrounded by cherry blossoms. A woman was found to have pulled on tree branches for a photo-op, while another woman had photographed herself with a snapped cherry blossom branch. The Japanese television program was first reported on by Chinese business website Hexun on April 8.

“Chinese people love nature. So this is how we like to have our pictures taken,” a Chinese female tourist told a Japanese television reporter, according to Chinese news portal Sina.  Another Chinese tourist said “I think sakura is very rare and I want to bring it home.”

One invited guest suggested that the Chinese authorities should do a better job informing its citizens about the proper tourist behavior, while the host of the television program suggested that a picture-taking section should be set up for Chinese tourists, according to Sina.

The television program also carried photos of an incident in Nanjing where a Chinese woman stomped on cherry trees to make its flower petals fall just for a photo shoot.

Internet users on China’s popular social media site Sina Weibo were ashamed by the behavior of their fellow countrymen. “AuqaTan” from Guangdong wrote: “A special section should be reserved for [Chinese tourists].”

“How can these people be allowed to travel to another country. Can the tour guide watch them more closely?” wrote “Li Qitian” from Heilongjiang.

For Some Chinese Tourists, Bad Behavior Begins at Home

“Don’t blame another country for discrimination. Even if our country has the world’s largest economy and the most powerful military, we still wouldn’t call ourselves a civilized country,” commented a netizen from Hebei.

Last month, a video showing Chinese tourists frantically snatching up every single fruit on a platter in a restaurant in Vietnam also drew the ire of Chinese Internet users.