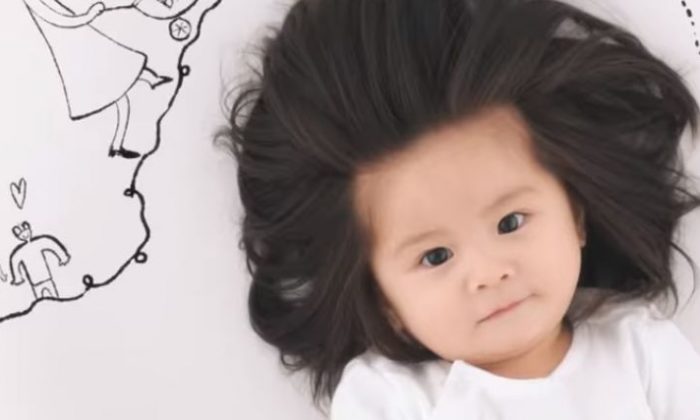 A Japanese baby who went viral last year due to her unique hair was given a modeling job, it has been reported.

Baby Chanco became a hair model at age 1 after mother Mami Kano started posting pictures of the child’s hair on Instagram last May, leaving many flabbergasted by her looks.

“I’m so surprised with the reaction, but also very proud of the praise from many countries,” Kano told People magazine on Jan. 8, adding that her girl has a “lighthearted smile and luxurious head of hair [that] doesn’t match her age.”

The adorable girl — and her impressive mane — are now the stars of a new Pantene ad!

People magazine asked her about how she cares for the girl’s hair, and she replied: “Brushing and just let her live as she is.”

And on Jan. 7, she appeared in Pantene’s new advertisement next to Japanese television announcer Sato Kondo, the report stated.

According to Popsugar, Chanco was born Dec. 23 Japan and “came out of the womb with a full head of hair.”

Kano told the publication that she doesn’t plan on cutting her girl’s hair.

“I prefer to keep her hair long, and in the future I want to try some new arrangements, like braids,” she added.

It comes days after a young woman who was once dubbed the “most beautiful” girl in the world was honored again.

Blondeau, 17, the daughter of French soccer player Patrick Blondeau and French fashion designer Veronika Loubry, made headlines more than ten years ago after she worked as a child model, Yahoo reported.