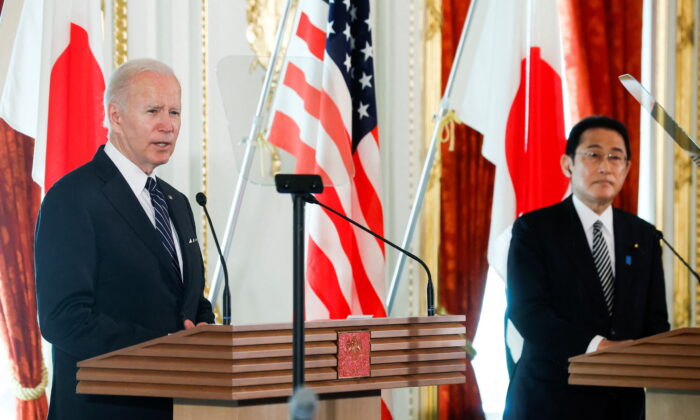 U.S. President Joe Biden speaks during a joint news conference with Japanese Prime Minister Fumio Kishida after their bilateral meeting at Akasaka Palace in Tokyo on May 23, 2022. (Jonathan Ernst/Reuters)
Space

President Joe Biden said on May 23 that a Japanese astronaut will board NASA’s Artemis mission to the moon, as the United States and Japan seek to expand civil space cooperation.

During a press briefing with Japanese Prime Minister Fumio Kishida in Tokyo, Biden said the partners are committed to sending a Japanese astronaut to the Gateway Station, a planned international space station that would orbit the moon.

“I’m excited at the work we will do together on the Gateway Station around the moon, and I look forward to the first Japanese astronaut joining us on the mission to the lunar surface under the Artemis program,” Biden said.

NASA said in a statement that Washington and Japan are working to formalize the Japanese astronaut’s inclusion on the Gateway project.

“With this historic announcement, President Biden is once again showing nations throughout the world that America will not go alone but with like-minded partners,” NASA administrator Bill Nelson said.

Biden also met with South Korean President Yoon Suk-yeol before arriving in Japan, during which the two leaders agreed to strengthen their alliance “across all sectors of space cooperation.”

The United States and Japan are also cooperating to use earth observation data to improve the capability to predict climate change, the White House said.

Both sides intend to conclude their framework agreement in 2023, which will “expand bilateral cooperation for decades to come across a wide variety of space exploration, scientific, and research activities.”

Washington will provide Japan with a sample from the asteroid Bennu in 2023, just as Japan provided the United States with an asteroid sample collected by Hayabusa2 in November 2021.

Japan has an extensive space program, mainly focused on developing launchers and space probes. But the country doesn’t have a human flight program and has relied on the United States and Russia to carry its astronauts into space.

The Japan Aerospace Exploration Agency (JAXA) reopened astronaut recruitment in 2021 to revive its pool of aging astronauts. NASA said it sees JAXA as a “critical partner” on the International Space Station and the Artemis project.

“JAXA’s planned contributions include I-HAB’s environmental control and life support system, batteries, thermal control, and imagery components, which will be integrated into the module by ESA (European Space Agency) prior to launch,” NASA said.

Japan also built the Kibo experiment module on the International Space Station, and resupply missions have been lifted into space by its heavy launch rockets.