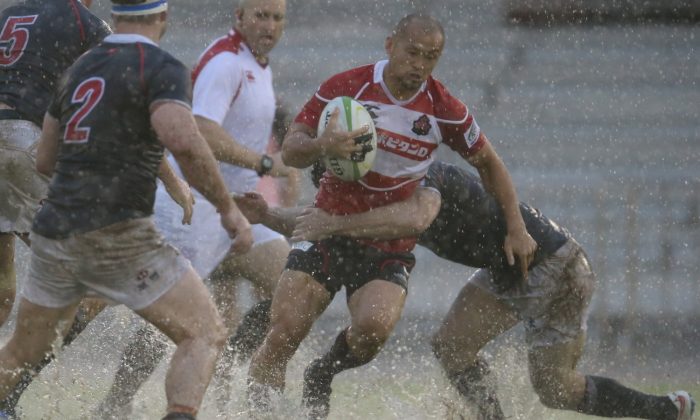 Only 13 minutes of the Hong Kong to Japan match could be played in the Asian Championship in Hong Kong on Saturday May 23, before action was stopped due to severe rain and pitch flooding. The points were shared 3-3 giving Japan a clean sweep in the tournament and allowing Hong Kong to take second place above Korea. (ARFU)
HK Rugby Union

Japan: winners of the Asian Rugby Championship for both Men and Women

HONG KONG—Japan was crowned the deserved champion of the new format for the 2015 Asian Rugby Championship. They were undefeated in their matches against South Korea and Hong Kong and the tournament provided valuable match practice in their build-up to the Rugby World Cup later in the autumn.

Their match against Hong Kong last Saturday, May 23, in Aberdeen was abandoned due to weather. It denied Japan useful preparatory work for the World Cup; and Hong Kong in seeing whether they had the grit and defensive nous to restrict Japan to score less than 29 points and thus secure the runner-up position.

The match was declared a draw, and the two teams split the points, three each. Japan was already the tournament winner, but this fortunate weather intervention meant Hong Kong became runner-up on 11 points, leaving Korea at the bottom of the table.

The game was stopped after 13 minutes, with Japan leading 3-0 though a penalty by Ayumu Goromaru. The pitch was inundated, unplayable and unsafe. After a 40 minute suspension it was agreed to abandon the game. The weather was still inclement, and with rain, a flooded pitch and thunder and lightning, player welfare was clearly an issue.

It was a surprise the match even started. The conditions were awful. The pitch was underwater. Ball handling was compromised. The scrum was slipping under foot. And Japan so dominant it was only a matter of time before the scoreline would reflect their supremacy in every aspect of the game. The result was never in doubt, just the number of points.

The Hong Kong Rugby Football Union is to be congratulated on the excellent preparation made for the match in Aberdeen, but such was the weather, that abandoning the game was a sensible decision. Eddie Jones, the Japan Coach reportedly thought the conditions were playable, but when has rain and lightning been a safe combination for player welfare? Andy Hall, the Hong Kong coach, was more pragmatic, praising officials for making a commonsense decision. For the spectators they were surprised the match even kicked off.

Women’s Championship
It wasn’t all bad news for Japan that day. The Japan Women beat Hong Kong 27-12, in an entertaining closely contested match. It was a curtain raiser for the main game of the day. The result ensured the Japan Sakura was the Women’s Asian Champion, unseating the much vaunted Kazakhstan team. Hong Kong came third, but produced a performance that afternoon which restored their pride and confidence after a disappointing match in Almaty against Kazakhstan. The game was a great advert for Women’s rugby. The conditions were not good but both teams produced skillful, enterprising rugby that was pleasure to watch. It augurs well for the development of the Women’s game in Asia.