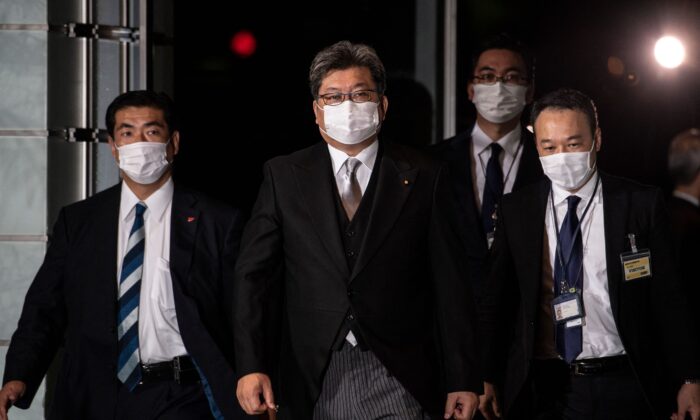 Japan will seek alternatives to reduce reliance on Russian coal imports as part of its sanctions against Moscow, the industry minister said on Friday.

“We will work further to reduce our dependency on Russia by pushing forward the diversification of energy sources, including renewables and nuclear power,” industry minister Koichi Hagiuda told reporters, Kyodo News reported.

Hagiuda also noted that Japan will need to find alternative suppliers to avoid domestic coal shortages, which could lead to power outages.

“We will corporate with Russian sanctions without inflicting burden on domestic industry,” he added.

Russia accounted for 11 percent of Japan’s total coal imports in 2021, according to government data. Russia was also Japan’s fifth-biggest supplier of crude and liquefied natural gas (LNG) in 2021.

The move comes after Prime Minister Fumio Kishida announced on Thursday that Japan will work with the Group of Seven (G7) advanced nations to impose additional sanctions on Russia, following reports of civilian deaths in Ukraine.

“[Russia’s] unforgivable acts have come into light one after another,” Kishida said. “We must not forgive its invasion and war crimes. We will demonstrate our will with severe action.”

He said that Japan will continue to provide humanitarian aid and secure seats on weekly direct flights linking Poland and Japan to assist in the evacuation of Ukrainians fleeing their country.

But the country will not pull out from the Sakhalin-2 LNG project in the Russian Far East, Kishida said on March 23, saying that the project is “extremely important” to Japan’s energy security.

Japan’s Mitsui and Mitsubishi each hold 12.5 and 10.5 percent stakes in the Sakhalin-2 project, while Russia’s state-run Gazprom PJSC owns 50 percent. Shell, which holds a 27.5 percent stake, exited the project in response to the war in Ukraine.

Japan has increased sanctions on Russian individuals and organizations over the war in Ukraine, restricting exports of certain goods to Russia and banning Russian banks from the SWIFT global interbank network.

Russia placed Japan on its “unfriendly nations” list and suspended peace treaty talks with Japan in retaliation for Tokyo’s sanctions against its invasion of Ukraine, a decision Japan strongly condemned.

On March 31, Russian President Vladimir Putin signed a decree requiring foreign companies from “unfriendly countries” to pay in rubles for Russian gas beginning April 1 in retaliation to Western sanctions imposed over its war on Ukraine.

Moscow has also denied targeting civilians and claimed that images of bodies in Bucha, a town northeast of Kyiv recaptured from Russian forces, were staged to justify additional sanctions against Russia and derail peace talks.