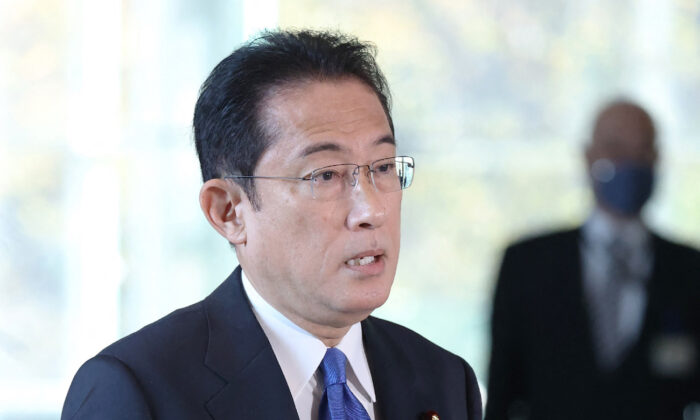 Japan's Prime Minister Fumio Kishida answers questions from reporters regarding the response to the Omicron COVID-19 variant at his office in Tokyo on Nov. 29, 2021. (JIJI Press/AFP via Getty Images)
Commodities

Japan Will Not Exit From Oil and Gas Project With Russia, Kishida Says

Japan will not pull out from the Sakhalin-2 liquefied natural gas (LNG) project in Russia despite the withdrawal of other companies over Russia’s invasion of Ukraine, Prime Minister Fumio Kishida said Thursday.

“It is an extremely important project in terms of energy security as it has contributed to the long-term, stable supply of inexpensive liquefied natural gas,” Kishida said in a parliamentary meeting, Kyodo News reported.

Kishida added that Japan would increase efforts to reduce reliance on Russian energy in coordination with the Group of Seven (G7) advanced countries’ plan.

Russia is Japan’s fifth-largest LNG supplier, accounting for about 8 percent of the country’s consumption. The Sakhalin-2 oil and gas project in the Russian Far East was one of Japan’s main LNG supply sources, with an annual capacity of 9.6 million tons.

Japan’s Mitsui and Mitsubishi each hold 12.5 and 10.5 percent stakes in the Sakhalin-2 project, while Russia’s state-run Gazprom PJSC owns 50 percent. Shell, which holds a 27.5 percent stake, exited the project in response to Russia’s invasion of Ukraine.

U.S.-based ExxonMobil has also pulled out from the Sakhalin-1 oil and gas project in Russia, following the footsteps of Western companies BP and Equinor.

Russian President Vladimir Putin on Thursday signed a decree requiring foreign companies from “unfriendly countries,” such as Japan and the United States, to pay in rubles for Russian gas beginning April 1 in retaliation to Western sanctions imposed over its war on Ukraine.

Putin said that buyers will need to set up ruble accounts in Russian banks to transfer payments, and that contracts will be terminated if they fail to make payments. The G7 nations claimed that it would be a “clear breach of existing agreements.”

Japan’s trade minister Koichi Hagiuda said Friday that the government will monitor the situation closely, though he believes that the decree will not immediately impact Japan, Nikkei Asia reported.

Japan has increased sanctions on Russian individuals and organizations over the war in Ukraine. The country has also restricted exports of certain goods to Russia and banned Russian banks from the SWIFT global interbank network.

Foreign Minister Hayashi Yoshimasa said at a G7 meeting on March 23 that Japan has been “reviewing possible measures” to implement the revocation of Russia’s most favored nation, which will result in higher taxes on Russian goods.

Meanwhile, Russia has put Japan on its “unfriendly nations” list and suspended peace treaty talks with Japan in retaliation for Tokyo’s sanctions against its invasion of Ukraine, a decision Japan strongly condemned.