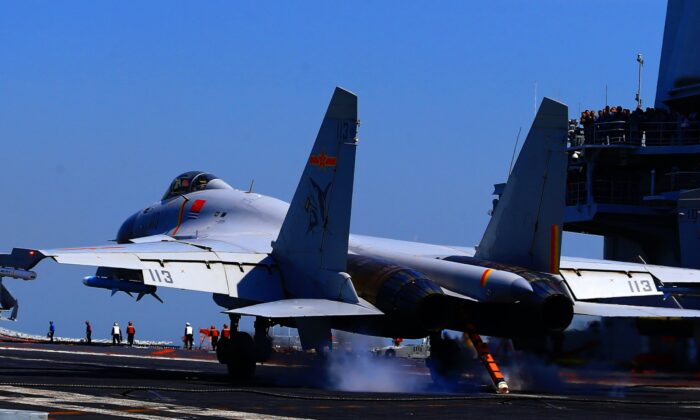 A J-15 fighter jet lands on China's Liaoning aircraft carrier during a drill at sea on April 24, 2018. (AFP via Getty Images)
Asia & Pacific

Japan’s Defense Minister said on May 10 that Chinese fighter jets have taken off and landed on an aircraft carrier more than 100 times in the past week while sailing near the southwestern prefecture of Okinawa.

The takeoffs took place in waters between 160 kilometers (99 miles) southwest of Okinawa’s Okidaito Island and 150 kilometers (93 miles) south of Ishigaki Island from May 3 to May 7, Defense Minister Nobuo Kishi told reporters.

Kishi said the activities could be part of China’s efforts to improve its capabilities to operate aircraft carriers and conduct operations in more distant waters and airspace, Japan Times reported.

The Chinese military confirmed on May 9 that naval and air force assets conducted drills from May 6 to May 8 to the east and southwest of Taiwan “to test and improve the joint operations capability of multiple services and arms.”

Japan first announced on May 3 that eight Chinese naval vessels, including the Liaoning aircraft carrier, were spotted sailing near islands in its southern Okinawa chain on May 1 and May 2.

The Japanese military deployed the Izumo light aircraft carrier to monitor the activities.

Taiwan also detected the Chinese flotilla on May 3 and deployed air defense missile systems to monitor its movements.

On May 9, Japan’s Joint Staff said in a tweet that the military scrambled fighter jets in response to a “suspected intrusion” by the Chinese aircraft into its airspace over the East China Sea from May 6 to May 8.

According to the Defense Ministry, four Chinese naval vessels, including the Liaoning, were sighted in the waters about 150 kilometers (93 miles) south of Okinawa prefecture’s Ishigaki Island on May 7.

The ministry noted that the Chinese warships were the same as those that were spotted passing between the Okinawa and Miyako islands from May 1 to May 2.

Meanwhile, Taiwan’s Defense Ministry said that 18 Chinese aircraft, including 12 J-11 and J-16 fighter aircraft, and two H-6 bombers, were spotted entering its defense identification zone on May 6. Taiwan reported more instances of Chinese warplanes entering its aerial territory from May 7 to May 10.

Beijing made its largest incursion into Taiwan’s airspace on Jan. 23 with 39 warplanes, including fighter jets and a bomber.

China claims self-governing Taiwan as part of its territory and has vowed to conquer the self-ruled island by force if necessary.