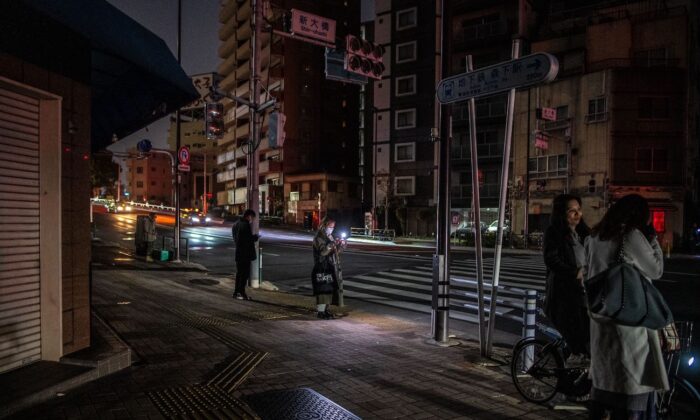 After a powerful 7.3-magnitude quake jolted east Japan, people stay along a street of a residential area during a power outage in Koto district in Tokyo early on March 17, 2022. (Philip Fong/AFP via Getty Images)
Asia & Pacific

Japan’s government on Tuesday urged citizens and businesses to conserve electricity, warning that the capital of Tokyo could face blackouts as a result of the cold weather and power plant outages caused by last week’s earthquake.

Snow fell in Tokyo on Tuesday, with temperatures forecast to peak at just 4 degrees Celsius (39.2 degrees Fahrenheit), compared with a high of 14 degrees on Monday.

The Ministry of Economy, Trade, and Industry issued a power crunch alert for areas supplied by Tokyo Electric (TEPCO) and Tohoku Electric Power Co in anticipation of a demand spike to meet heating needs amid freezing temperatures.

“We request your cooperation to save electricity as much as possible, such as by setting your thermostats at around 20 degrees Celsius and switching off any unnecessary lights,” Chief Cabinet Secretary Hirokazu Matsuno told a news conference.

Matsuno said that the request for power savings is unlikely to be extended beyond Tuesday given the expected rise in temperatures and the addition of more solar power generation as the weather improves.

A magnitude 7.4 earthquake off the coast of Fukushima prefecture on March 16 killed at least four people and left thousands of homes without power, forcing several thermal power plants in the region to shut down.

TEPCO said on Monday that it is working with utility companies throughout Japan, including Tohoku Electric Power Company, to implement “various supply-demand countermeasures.” But it warned that the power supply in Tokyo could be “extremely tight” on March 22.

“We are continuing to closely examine the situation, but we predict that we may not be able to supply enough power to meet expected demand,” the company said in a statement.

It requested seven regional utilities to provide a power supply of up to 1.42 million kilowatts and urged consumers to save electricity by turning off unnecessary lighting and setting their heaters to a temperature of 20 degrees Celcius.

Trade and Industry Minister Koichi Hagiuda also called for an additional 5 percent or so of power savings every hour from 3 to 8 p.m., which is equivalent to about 2 million kilowatts per hour.

The earthquake occurred just days after the 11th anniversary of a similar disaster in 2011 when the same region of northern Japan was struck by a deadly 9.0 magnitude earthquake and tsunami that triggered nuclear plant meltdowns and left more than 22,000 people dead.

It struck around 89 kilometers (55 miles) from the Fukushima Nuclear Power Plant, which is in the process of being decontaminated and decommissioned following the 2011 disaster that knocked out the Fukushima Daiichi plant’s cooling systems, triggering the meltdown of three reactors.