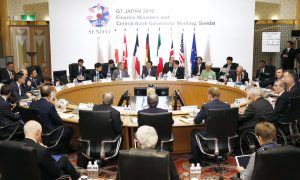 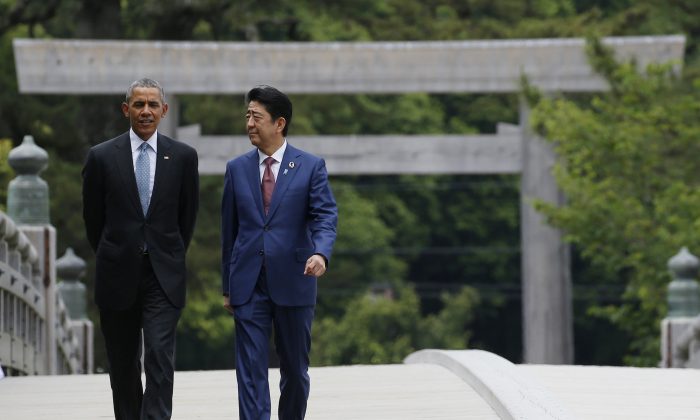 Abe and his counterparts sat down at a big round table for the first of their summit working sessions after strolling through the grounds of the Ise (Ee-say) Shrine, a tranquil, densely forested landmark that is the holiest site in the Japan’s indigenous Shinto religion, and then joining a group of children in a tree planting ceremony.

The G-7 gathering dovetails in many ways with Abe’s long-term diplomatic, political and economic agenda. A dramatic statement about global economic risks and a strong show of support for public spending to help spur growth could help Abe justify extra stimulus and possibly provide political cover for postponing an unpopular but badly needed increase in the sales tax next April.

An aide said Abe planned to use data charts dramatically illustrating the severity of the recent slump in commodity prices and the slowdown in China.

“There is a concern that the sluggish economy might last some time, and that Abe hopes to share a common notion about the potential risks,” said Hiroshige Seko, a deputy chief cabinet secretary.

Abe hopes the group would “take leadership as the G-7 and convey a powerful message to the rest of the world,” he said. Seeking to enhance Abe’s legacy, the message would be dubbed the “Ise-Shima” principle, he said.

The leaders were expected to turn their attention to trade, politics and diplomacy and on climate change and energy during talks later Thursday.

The annual summit brings together the leaders of Britain, Canada, France, Germany, Italy, Japan and the United States. It is taking place amid extraordinarily tight security around the remote summit venue, with uniformed police standing guard at close intervals on both sides of roads and randomly in forests, rice fields, soccer fields and other locations.

Many of the issues to be discussed during their two days of talks are linked to other Abe policy priorities. They include maritime security — code for concerns over China’s expanding presence in disputed areas of the South China Sea; initiatives on global health, including funding for fighting terrorism and pandemics; and a focus on women’s empowerment, which Abe has promoted as “womenomics.”

Both in the G-7 meetings and in “outreach” sessions with other countries’ leaders on the sidelines of the summit, the agenda includes “quality infrastructure investment.” Since taking office in late 2012, Abe has circled the globe, visiting dozens of countries to promote sales of Japanese infrastructure technology, especially coal and gas-fired power plants and bullet trains.

“We think Japan has demonstrated to the rest of the world what quality infrastructure is like,” said Japanese Foreign Ministry spokesman Yasuhisa Kawamura, “and we’re very happy to share our experiences and expertise.”

Japan planned to propose expanding support, including development assistance loans, for building roads, power plants and other infrastructure around the world, seeking a target of $200 billion in financing. Tokyo also plans to spend about $6 billion on education, training and job creation for 20,000 people in the Middle East, to help promote development and social stability in the region and counter the chronic unemployment and economic disparities that are contributing to extremism and violence, the Japanese government said.

On gender issues, Japan plans to help improve schooling conditions for 50,000 girls, mainly in Africa and South Asia, and provide training for 5,000 women in fields such as maternal and child health, it said.

Japanese officials have highlighted joint efforts on corruption, terrorism, global health and migration, which has become a huge headache especially for European nations, as other top priorities.

“Those who criticize us should rather think how to increase their assistance because what Europe provides is already massive,” Donald Tusk, president of the European Council, calling for G-7 support and leadership. “And honestly speaking, if they don’t take the lead in managing this crisis, nobody else will. I will appeal to G-7 leaders to take up this challenge.”

Tusk said the EU was seeking more support for refugees and creation of resettlement schemes and other forms of legal migration around the world.

A possible exit from the European Union by Britain, depending on a June 23 vote, is also hanging over the talks.

U.S. President Barack Obama arrived in Japan on Wednesday and had an evening meeting with Abe. After the summit ends on Friday, Obama plans to visit the peace park in Hiroshima, becoming the first sitting U.S. president to visit the city on which the U.S. dropped an atomic bomb in 1945 in the closing days of World War II.