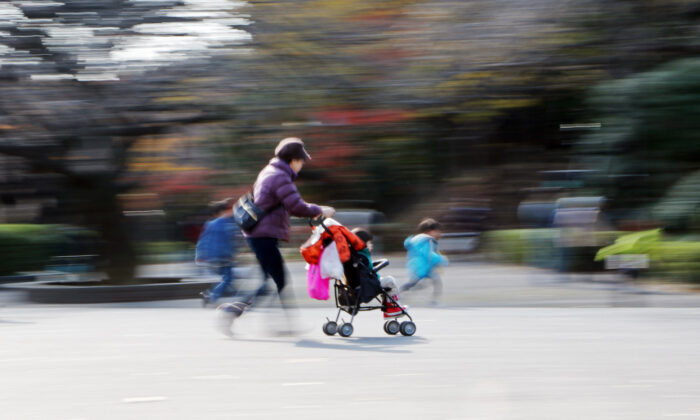 A file image of a woman with a pushchair walking with children at a park in Tokyo. (Yoshikazu Tsuno/AFP via Getty Images)
Asia & Pacific

Japan’s government is set to amend a century-old Civil Code provision that presumes an ex-husband is the legal father of a woman’s child within 300 days of their divorce, even when the woman has remarried, local media reported on Thursday.

The proposed change to the Civil Code provision will give the new spouse legal paternity, regardless of how long they have been married.

A subcommittee of the Justice Ministry’s Legislative Council approved the proposed revision to the Civil Code provision, which was finalized on Feb. 1, marking the first amendment to the rule since it took effect in 1898, local media The Mainichi reported.

The proposed amendments are expected to be submitted to the National Diet, which refers to Japan’s House of Representatives, once they have been approved by the full Legislative Council and the Justice Minister, according to the report.

The subcommittee aims to reduce the number of children who did not have a family register, following the finding of 825 persons who lacked a family register as of January this year. Of that number, 591 lacked a family record because their mothers were hesitant to submit a birth announcement due to the existing 300-day paternity rule recognizing the ex-husband as their child’s legal father, depriving them of public and private services in Japan.

Divorced women are most likely to want to avoid submitting a birth announcement for their child as a result of domestic abuse, remarriage, or conceiving with another partner, the Justice Ministry said.

The proposed amendment to the Civil Code would also eliminate the country’s 100-day remarriage ban, which only applies to Japanese women, as it is rendered obsolete by the subcommittee’s other proposals.

Women who stayed single after their divorce would still have their ex-husbands be the legal father of the child under the law.

The subcommittee also suggested providing women and children the right to deny paternity, an option which is currently only available to a husband or ex-husband, up to three years after the child’s birth instead of the existing one year.

In addition, the proposed amendments to the Civil Code also include deleting the word “disciplinary rights” from the provision on parental authority to prevent child abuse.

The subcommittee suggested that it be repealed and replaced with a provision that promotes respect for children as individuals.