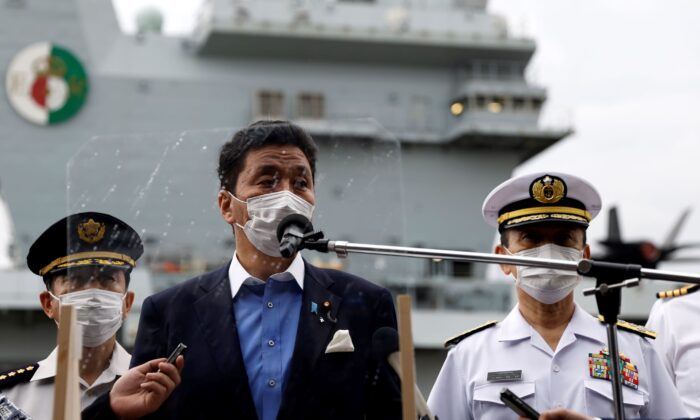 Japan's Defense Minister Nobuo Kishi (C) speaks to the members of the media after he inspected the British Royal Navy's HMS Queen Elizabeth aircraft carrier, back, at the U.S. naval base in Yokosuka, Kanagawa Prefecture, Japan on Sept. 6, 2021. (Kiyoshi Ota/Pool Photo via AP)
Asia & Pacific

Kishi voiced concerns about the situation in the East China Sea, particularly the Senkaku Islands where China has been making repeated intrusions, urging China to “self-restraint,” according to the Japanese Defense Ministry.

The Senkaku Islands in the East China Sea have mostly been administered by Japan since 1895, but Beijing began asserting its rights over the islands in the 1970s. In China, the islands are called the Diaoyu Islands.

Japan has strongly protested repeated intrusions by Chinese vessels into the seas for decades. On Nov. 19, four Chinese ships reportedly entered Japanese territorial waters near the Senkaku Islands, the 37th case of Chinese patrol vessels entered into the territorial waters of Japan this year.

Wei told Kishi that China would “firmly safeguard its territorial sovereignty and maritime rights and interests” in Senkaku Islands. He also emphasized the need for both countries to make joint efforts to maintain stability in the East China Sea, according to the Chinese Defense Ministry.

Japan must face history squarely and learn from history, and this is the correct attitude and wise choice, Wei said.

The discussion also covered the importance of stability in the Taiwan Strait, where tensions between the self-ruled island of Taiwan and China have been rising. China claims the democratically-elected country as part of its territory and has threatened to bring the island under its control by force if necessary.

Wei pointed out that China and Japan should “strengthen high-level exchanges” and “jointly control risks” to prevent escalation of conflicts between the two countries.

The two ministers have also agreed to start operating a hotline between their defense officials by the end of next year.

“We confirmed that the early establishment of a hotline between Japanese and Chinese defense authorities is important,” Kishi told reporters after the video conference, reported Kyodo News.

The two-day drill, which involved the Self-Defence Forces, coastguard, and police, was not “intended for a specific island or a country” but rather to improve Japan’s response to emergency situations in the country’s island areas, the government said.