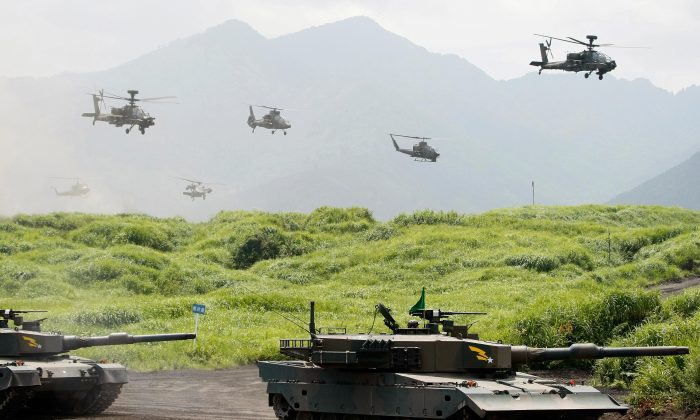 Ninety-type tanks move along with helicopters during a live-fire exercise for Japan's ground Self-Defense Force at the foot of Mount Fuji, on Aug. 21, 2008. Japan is considering weakening the constitutional limitations placed on its military forces. (KEN SHIMIZU/AFP/Getty Images)
Viewpoints

Japan Struggles to Define Itself

For over 70 years, Japan has struggled with a legacy of aggression stemming from its attacks on Pearl Harbor and throughout Asia—while professing victimhood by being the only nation struck by nuclear weapons.

For many Americans, the plea of “victimhood” is risible; our response is “No Pearl Harbor; no Hiroshima.”

But despite its legacy of aggression and subsequent documentation of stomach-turning treatment by Japanese troops of Chinese civilians and U.S. prisoners of war, Japan quickly became an invaluable ally. Driven by the need for Japanese bases during the Korean War, starting in 1950, and as a counterforce for communist China following the communist’s 1949 victory, Washington papered over Pearl Harbor and POWs to create a regional counterweight.

At the same time, in an effort to create a “never again” neutering of Japanese aggression, its national constitution (essentially written by U.S. authors and labeled the “MacArthur Constitution”) included provisions designed to limit the armed forces to defensive action.

The stability of the long-standing “Quadrilateral Interface” for Northeast Asia (Russia, China, Japan, Korea) was guaranteed by the U.S. military presence and ultimately the U.S. nuclear umbrella protecting Japan and South Korea.

During the past decade-plus, however, all circumstances have been altering. Moscow has essentially opted out of Far Eastern action. Seoul has become a major economic power, while also developing military forces sufficient to withstand conventional attack by Pyongyang. Beijing has become a massive global economic force with potentially dominant military capability in the region. Most startling of all, Pyongyang by making enormous economic sacrifices, coupled with draconian sociopolitical restrictions on its citizens, has become a nuclear power—perhaps with the ability to launch ICBMs threatening the entire United States and, most immediately pertinent, Tokyo.

Tokyo has viewed none of these developments with special enthusiasm. Seoul is an “elbow in the ribs” economic/trade competitor. Beijing has revived territorial disputes over the Senkaku Islands in East China Sea and is doing the international equivalent of bullying “sand kicking” by fortifying South China Sea islands. Beijing has muscled Tokyo from the global center stage in Asia.

Most unsettling, in many regards, is the threat from Pyongyang, which remains relentlessly hostile, including kidnapping Japanese to serve as language instructors for potential North Korean spies. The cold reality is that North Korean nuclear weapons landing on Japanese cities would de facto destroy Japan. At the same time, the U.S. nuclear umbrella looks increasingly Swiss cheese tattered when Japanese leadership reflects on the credibility of U.S. government willingness to sacrifice its major cities to save those in Japan if faced with nuclear blackmail by Pyongyang.

And given the pernicious rhetoric emanating from Pyongyang on a virtually daily basis, no one in the region is sanguine that its nuclear ballistic missile power can be deterred by traditional combinations of diplomacy, sanctions, and military counterforce.

Discretion being the better part of valor, Japanese Prime Minister Shinzo Abe, who has just strengthened his political position by winning a smashing “super majority” in October elections, is maneuvering to remove constitutional limitations over military action. Increasingly honored in the breach, revising the constitution would give Japanese “self defense forces,” official legal authority to act more aggressively and cooperate more intensely with U.S. forces.

Already operating one of the largest complements of F-15s (over 200), Japan plans to purchase over 40 F35s—and considering basing one variant on combat warships to create the equivalent of mini-aircraft carriers with stealthy F-35s able to strike North Korean targets.

Additionally, Japan has announced the purchase of surface-to-surface cruise missiles that could be employed against Pyongyang missile sites.

Concurrently, Japan has “upped its game” defensively with a plethora of antimissile systems including two ground-based AEGIS (Aegis Ashore) systems—Moscow has complained about Tokyo’s recent purchase decision (and was ignored). Aegis Ashore will complement the six Aegis missile cruisers Japan already operates for potential defense against a Pyongyang attack.

Finally, although it is “closeted” and spoken of only in hushed tones, how long would it take for Tokyo to develop a nuclear deterrent of its own? Private estimates range from a few years to only as long as it would take to roll weapons out of secure storage. If South Africa could develop nuclear weapons in total secrecy, Japan could certainly do so as well. Tokyo has sufficient fissile material and sophisticated engineers; the path to nuclear capability has been well trodden.

A prudent Japanese leader, considering the mutability of the U.S. defense commitment might well act to develop its nuclear deterrent—if it hasn’t done so already.