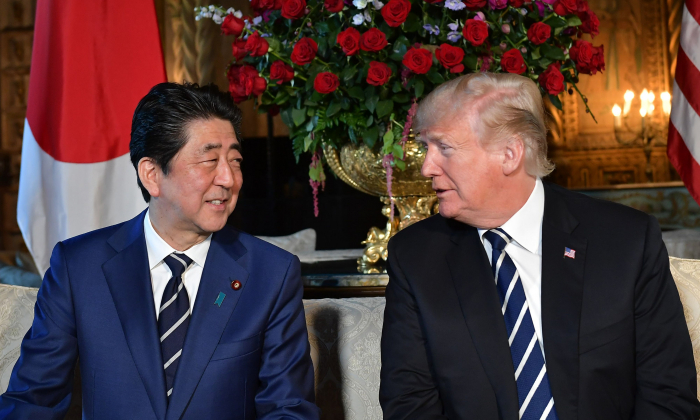 Japan Should Not Be a Second Thought in US Policy

Japanese Prime Minister Shinzo Abe visited the United States from April 17 to 18, but the importance of his visit was largely lost in the maelstrom of media reporting on the U.S.-led strike on Syrian chemical weapons facilities, the seizure of President Donald Trump’s personal lawyer’s records, and the release of former FBI Director James Comey’s smear-all account of his relations with Trump.

The treatment of Abe was not quite on the level of “disrespect,” but rather it reflected the media’s inability to differentiate between the strategically significant and the tactically transitory. Without belaboring the obvious, U.S. relations with Tokyo are more important than Assad’s use of chemical weapons and Comey’s strained analogy of Trump as a mafia chief or his snippy comment on the size of Trump’s hands.

What we have, however, is a serious need to review the bilateral and multilateral bidding between Washington and Tokyo.

Abe has invested heavily in Trump. He was the first foreign leader to visit Trump after the election and, reportedly, they have met and spoken 20 times—more than Trump has met with any other foreign leader. Good relations with Trump were to be an Abe “trump card” in Japanese domestic politics as Abe seeks his party’s support for an unprecedented third term as prime minister.

Read More
US Should Embrace Japan–India Alliance and TPP

Unfortunately for Abe, the trump card has become something of a “joker.” Washington caught Tokyo by surprise both by opening to direct discussions with Pyongyang and by not waiving aluminum/steel tariffs as it had for other major allies.

Abe has also been deviled with nagging fiscal scandals in his Finance Ministry recently, augmented by sexual harassment charges by a female reporter against a senior finance ministry official. These have been coupled with political opposition to Abe’s commitment to modify the pacifistic Japanese constitution to weaken some of its restrictions on military action.

The upshot has been to drive popular support for Abe’s cabinet to record lows. In one popular poll, it dropped to 26.7 percent. Other polls are less dire, but Abe’s popularity has declined markedly from a year ago. The intimation from these projections is that Abe could be forced out in a party leadership review later this year.

Consequently, Abe wants Washington to reinforce its commitments to Japanese security in any prospective talks with Pyongyang. Japan is far more “under the gun” from Pyongyang’s missile and nuclear threat than the still abstract ability of Kim to strike the United States with nuclear ICBMs.

Abe may fear that Pyongyang could beguile an inexperienced and impetuous U.S. negotiating team with vague blandishments regarding a nuclear-free peninsula without providing any verifiable commitments. He will probably note that Washington has been down this road before, with Pyongyang extracting useful economic concessions while effectively evading ostensible commitments and continuing its nuclear and missile programs.

In short, Abe will want to know that Washington is intimately aware of the false hopes previous negotiations with Pyongyang have generated. Does Washington really believe that Kim will surrender its nuclear power without massive concessions (damaging to Japanese interests) from Washington and Seoul?

Abe will also be struggling to secure a coherent understanding of U.S. economic strategy. Just what is behind recent intimations that Washington is considering returning to participation in the Trans-Pacific Partnership? What would be the “quid” for the United States waiving tariffs on Japanese aluminum and steel exports?

Abe may take some comfort in the presence of a more hardline group of U.S. national security officials, including national security adviser John Bolton and prospectively Mike Pompeo as secretary of state. One may assume they will view the North Korean threat with closer to the same optic as does Abe.

However, Washington dares not take Abe’s presence and support as a given. Without question, he is our best bet for maintaining Japanese foreign policy support. His domestic and internal party contretemps probably reflect temporary problems that he can navigate past without being ousted.

But recent foreign policy has been replete with surprises; we must “cross fingers” in the hope that Abe continues as prime minister.