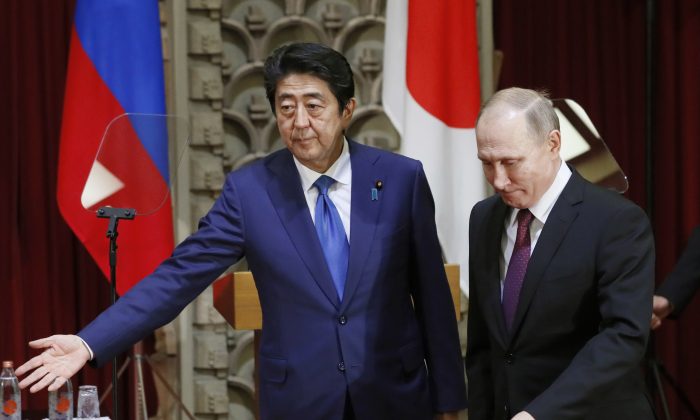 TOKYO—Russia and Japan agreed Friday to hold talks on joint economic development on four islands at the center of a decades-old territorial dispute between the countries.

It was a small step forward that fell far short of breaking the stalemate in a dispute that has prevented Russia and Japan from signing a peace treaty formally ending World War II.

Asked about developments in Syria, Putin said that he and Turkish President Recep Tayyip Erdogan are working to launch a new round of peace talks in Astana, the capital of Kazakhstan.

For Putin, the summit meeting marked his first official visit to a G-7 country since Russia annexed Crimea in 2014. Abe, eager for progress on the territorial issue, invited Putin even though Japan and the other G-7 nations still have sanctions on Russia.

The dispute centers on four southern Kuril islands, which Japan calls the Northern Territories. The Soviet Union took the islands in the closing days of World War II, expelling 17,000 Japanese to nearby Hokkaido, the northernmost of Japan’s four main islands.

Abe said Friday that he has his justice, and Putin, his own.

“If we just insist on our own justice, we can never resolve the problem,” he said. “We must make an effort to open a new future in Japan-Russia relations for the new generation.”

Putin said he did not know how the dispute could be resolved, but he said the islands should be seen not as a point of contention point but “a place that brings Japan and Russia together.”

“We are different people. We lost the war, and we feel that we were taken advantage of,” he said. “But there is hope. They say win-win, which means that is good for both peoples, right?”

An agreement on joint economic development is far from a given, because of the dispute over sovereignty. Russia says that any development should be governed by Russian laws, while Japan is pushing for a special framework that in Abe’s words would not “infringe the sovereignty positions of either side.”

“It’s a huge problem,” said James Brown, a Japan-Russia expert at Temple University’s Japan campus in Tokyo. “There is every chance it will never happen.”

Before the news conference, the two countries exchanged a number of broader economic, cultural, science and sports cooperation agreements.

Putin said Japanese involvement will be crucial to development of Russia’s far east.

“Russia and Japan haven’t had very much economic cooperation,” Putin said earlier Friday. “It is necessary to expand the potential of our economic ties.”

The talks opened Thursday evening at a hot springs resort in western Japan. On Friday, Putin arrived about 45 minutes late in Tokyo, because of a mechanical problem with his presidential aircraft. He used a backup plane, according to Japanese media.

After the news conference, Abe and Putin spoke at a joint Japan-Russia business forum and visited a judo center before Putin’s departure. Putin is well-known for practicing judo.

“I believe, from a long-term prospect, that we could achieve a historic resolution,” he said.

Abe said he and Putin also agreed to start discussing ways for former Japanese residents of the islands to visit their hometowns freely. Up to now, they have been allowed to go to the islands only under special arrangements.