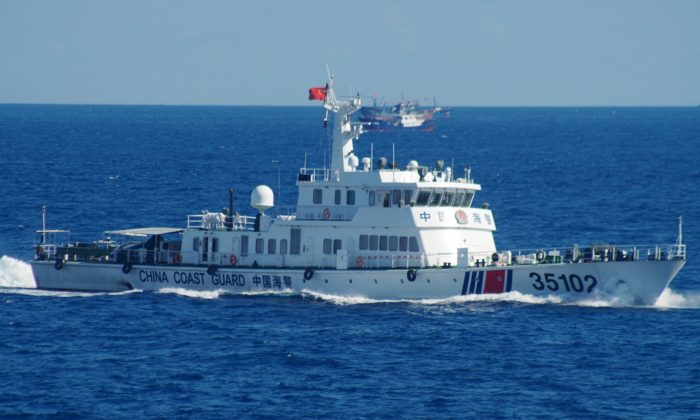 Japan’s Foreign Ministry said in a statement that it filed the protest after the Japanese coast guard spotted the vessels Saturday along with a fleet of 230 Chinese fishing boats swarming around the Japanese-controlled Senkaku Islands. China also claims the islands, which it calls the Diaoyu.

Japan was demanding that the ships leave the area. Three of the Chinese coast guard vessels were armed with what appeared to be gun batteries, Japan’s Foreign Ministry said.

The Chinese fleet has not intruded in Japanese territorial waters so far, it said.

Asked about Japan’s statement, China’s Foreign Ministry reiterated its position that the islands are “China’s inherent territory” and that it has “indisputable sovereignty” over them and their adjacent waters.

In a statement, Chinese Foreign Ministry spokeswoman Hua Chunying called on Japan to refrain from “any action that could lead to a tense or complicated situation.”

China’s increasingly assertive maritime activities in the East and South China seas have raised concerns and tensions in the region. Japan has joined the U.S., the Philippines and others in urging China to abide by international law after a U.N. arbitration panel ruled in favor of the Philippines in its maritime dispute with Beijing in the South China Sea.

China says it doesn’t recognize the July 12 ruling by the Permanent Court of Arbitration.

Relations between Japan and China have been strained over wartime history, a sensitive topic for the region in times of war-end anniversaries during the summer.

China’s coast guard vessels routinely sail around the islands, usually in pairs or up to four. Until now, only one of the vessels was armed.

Saturday’s fleet size and equipment showed “an escalation of the situation that could heighten tensions in the waters,” Japan’s Foreign Ministry said, without elaborating on what might have caused the increase.