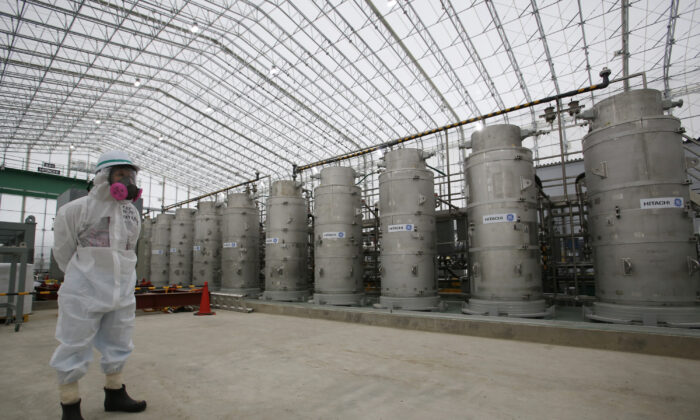 Japan Proposes Release of Fukushima Water to Sea or Air

TOKYO—Japan’s economy and industry ministry proposed on Dec. 23 the gradual release or evaporation of massive amounts of treated but still radioactive water being stored at the tsunami-wrecked Fukushima nuclear plant.

The proposal to a group of experts is the first time the ministry has narrowed down the various options available to those choices. It is meant to solve a growing problem for the plant’s operator as storage space for the water runs out, despite fears of a backlash from the public. The draft proposal will be discussed further.

Nearly nine years after the 2011 meltdowns of three reactor cores at the Fukushima Dai-ichi Nuclear Plant, radioactive water continues to accumulate as water used to keep the cores cool leaks from the damaged reactors and is stored in tanks so it won’t escape into the ocean or elsewhere.

For years, a government panel has discussed ways to handle the crisis and to reassure fishermen and residents who fear possible health effects from releasing the radioactive water, as well as harm to the region’s image and fishing industry.

Fukushima fishermen and the National Federation of Fisheries Co-operative Associations have strongly opposed past suggestions by government officials that the water be released to the sea, warning of an “immeasurable impact on the future of the Japanese fishing industry,” with local fishermen still unable to resume full operations after the nuclear plant accident.

The water has been treated, and the plant operator, Tokyo Electric Power Co., states that all 62 radioactive elements it contains can be removed to levels not harmful to humans except for tritium. There is no established method to fully separate tritium from water, but scientists say it isn’t a problem in small amounts. Most of the water stored at the plant still contains other radioactive elements including cancer-causing cesium and strontium and needs further treatment.

A release is expected to take years and radiation levels will be kept well below the legal limit, the proposal said.

The ministry noted that tritium has been routinely released from nuclear plants around the world, including Fukushima before the accident. Evaporation has been a tested and proven method following the 1979 core meltdown at Three Mile Island nuclear plant in the United States, where it took two years to get rid of 8,700 tons of tritium-contaminated water.

TEPCO says it is currently storing more than 1 million tons of radioactive water and only has space to hold up to 1.37 million tons, or until the summer of 2022, raising speculation that the water may be released after next summer’s Tokyo Olympics. TEPCO and experts say the tanks get in the way of ongoing decommissioning work and that space needs to be freed up to store removed debris and other radioactive materials. The tanks also could spill in a major earthquake, tsunami, or flood.

Experts, including those at the International Atomic Energy Agency who have inspected the Fukushima plant, have repeatedly supported the controlled release of the water into the sea as the only realistic option.

On Dec. 22, some experts on the panel called for more attention to be given to the impact on the local community, which already has seen its image harmed by accidental leaks and the potential release of water.

“A release to the sea is technologically a realistic option, but its social impact would be huge,” said Naoya Sekiya, a University of Tokyo sociologist and an expert on disasters and social impact.

Takami Morita, a radiology expert at the Fisheries Research Agency, said simulations of a water release largely represented TEPCO’s point of view. “It is important we look at it from the other side,” Morita said, urging officials to provide more data about a release and its possible impact.

An earlier government report provided five possible ways to get rid of the water, including releasing it into the sea and evaporation. The three others included underground burial and its injection into deep geological layers.

The ministry ruled out long-term storage of the radioactive water in large industrial tanks outside the plant, citing the risk of leakage from corrosion, a tsunami, or other disasters and accidents, as well as the technical challenge of transporting the water elsewhere.