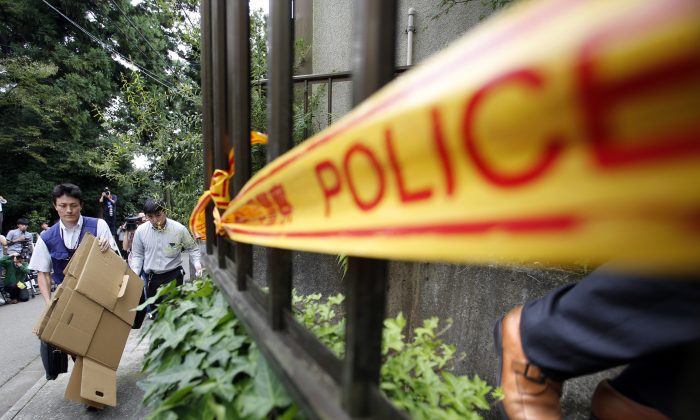 Police officers enter into the house of Satoshi Uematsu, the suspect in a mass stabbing attack, in Sagamihara, outside of Tokyo, Wednesday, July 27, 2016. The suspect was being transferred Wednesday from a local police station to the prosecutor's office in Yokohama. (AP Photo/Shizuo Kambayashi)
Asia & Pacific

SAGAMIHARA, Japan—Japanese police on Wednesday searched the home of the suspect in a mass stabbing spree that left 19 people dead at a facility for the mentally disabled.

The suspect, 26-year-old Satoshi Uematsu, was transferred earlier in the day from a local police station to the prosecutor’s office in Yokohama.

The attacker left dead or injured nearly a third of the approximately 150 patients at the facility in a matter of 40 minutes early Tuesday, Kanagawa prefectural authorities said. The fire department said 25 were wounded, 20 of them seriously.

Uematsu turned himself into police about two hours after the pre-dawn attack in Sagamaihara, a city about 50 kilometers (30 miles) west of central Tokyo.

He had worked at the facility until February, when he delivered a letter to Parliament outlining a bloody plan to attack two facilities for the handicapped and saying all disabled people should be put to death.

Kanagawa prefecture welfare department official Shogo Nakayama said that officials from the Sagamihara facility confronted him about the letter a few days later, and Uematsu quit.

His head and shoulders hidden with a blue jacket, the suspect was led out of a police station in Sagamihara on Wednesday morning and into the back of an unmarked white van with emergency lights on top. Photographers and video journalists swarmed the van as it pulled away.

At his house in Sagamihara police took in cardboard boxes to carry out any evidence. Parts of the property were sealed off with yellow police tape.

The parents of one of the seriously injured residents of the facility told Japanese television network NTV that their son is unconscious and on artificial respiration.

“I feel anger that he was a former worker,” the mother said of the attacker. NTV did not identify the parents or show their faces.

Uematsu broke into the Tsukui Yamayuri-en facility by shattering a window at 2:10 a.m., according to a prefectural health official, and then set about slashing the residents’ throats.

Sagamihara fire department official Kunio Takano said the dead were 10 women and nine men, ranging in age from 19 to 70. All those killed were residents, said Tatsuhisa Hirosue, another Kanagawa welfare division official.

Further details of the attack, including whether the victims were asleep or otherwise helpless, remained unclear Wednesday.

In February, Uematsu tried to hand deliver a letter to Parliament’s lower house speaker that revealed his dark turmoil. It demanded that all disabled people be put to death through “a world that allows for mercy killing,” Japanese media reported.

Uematsu boasted in the letter that he had the ability to kill 470 disabled people in what he called “a revolution,” and outlined an attack on two facilities, after which he said he would turn himself in.

“My reasoning is that I may be able to revitalize the world economy and I thought it may be possible to prevent World War III,” the letter says.

Lower house official Yoko Otsuka said that the letter was reported to Tokyo police, who in turn informed police in Kanagawa.

Mass killings are rare in Japan, and Tuesday’s was the deadliest in decades. Seven people were killed in 2008 by a man who slammed a truck into a crowd in central Tokyo’s Akihabara electronics district and then stabbed passers-by.

In 2001, a man killed eight children in a knife attack at an elementary school in the city of Osaka. The incident led to increased security at schools.