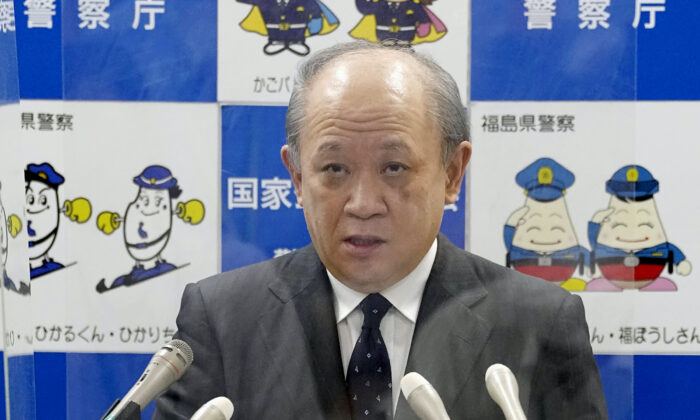 TOKYO—Japan’s national police chief said Thursday he will resign to take responsibility over shortfalls in security that an investigation by his own agency showed did not adequately safeguard former Japanese Prime Minister Shinzo Abe from a fatal shooting of at a campaign speech last month.

Nakamura said he took the former prime minister’s death seriously and that he submitted his resignation to the National Public Safety Commission earlier Thursday.

“In order to fundamentally reexamine guarding and never to let this happen, we need to have a new system,” Nakamura told a news conference as he announced his intention to step down.

The alleged gunman, Tetsuya Yamagami, was arrested at the scene and is currently under mental evaluation until late November. Yamagami told police that he targeted Abe because of the former leader’s link to the Unification Church, which he hated.

Abe sent a video message last year to a group affiliated with the church.

In a 54-page investigative report released Thursday, the National Police Agency concluded that the protection plan for Abe neglected potential danger coming from behind him and merely focused on risks during his movement from the site of his speech to his vehicle.

Inadequacies in the command system, communication among several key police officials, as well as their attention in areas behind Abe at the campaign site led to their lack of attention on the suspect’s movement until it was too late.

None of the officers assigned to immediate protection of Abe caught the suspect until he was already 7 meters (yards) behind him where he took out his homemade double-barrel gun, which resembled a camera with a long lens, to blast his first shot that narrowly missed Abe. Up to that moment, none of the officers was aware of the suspect’s presence, or recognized the blast as a gun shot, the report said.

In just over two seconds, the suspect was only 5.3 meters (yards) behind Abe to fatally fire the second shot.

The report called for significant strengthening in both training and staffing of Japan’s dignitary protection, as well as revising police protection guidelines for the first time in about 30 years. It said the prefectural police’s Abe protection plan lacked a thorough safety evaluation and largely copied an earlier visit by another top party lawmaker.

The national police called for doubling dignitary protection staff in Tokyo, a greater supervisory role for the national police over prefectural staff, and use of digital technology and drones to bolster surveillance from above ground. The police agency also proposed bullet-proof shields that are not yet used in Japan, a country known for strict gun control.

Abe’s family paid tribute to him in a private Buddhist ritual Thursday marking the 49th day since his assassination. His younger brother and former Defense Minister Nobuo Kishi, and other senior party officials and ministers reportedly attended.

About 1,000 people, including Prime Minister Fumio Kishida, attended an earlier private funeral at a Tokyo temple days after his death.

In Nara on Thursday, prefectural police chief Tomoaki Onizuka also expressed his intention to step down over Abe’s assassination.

“I have been almost crushed by the seriousness of my responsibility” in the former leader’s death, teary Onizuka said. “We will grit our teeth and endeavor in order to regain the public trust and be helpful to the people in the prefecture and across Japan.”