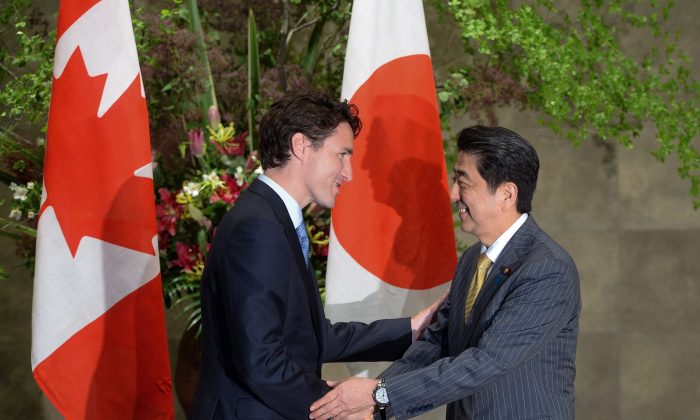 TOKYO—Japan’s Prime Minister Shinzo Abe upped the pressure on Justin Trudeau this week by publicly suggesting his Canadian counterpart’s positions had budged on a pair of prickly international files.

Following a bilateral meeting with the visiting Canadian prime minister in Tokyo on Tuesday, May 24, Abe read a statement to reporters saying the two leaders shared “serious concern” about the territorial dispute that involved the “building of outposts” in the South China Sea.

Speaking through an interpreter, Abe also said that Japan would continue to make efforts to seek early ratification of the controversial Trans-Pacific Partnership treaty (TPP) “together with Canada.”

But Canada’s interpretation of the meeting was somewhat different on those two issues.

Trudeau initially made no mention of the contentious South China Sea dispute in remarks that followed Abe’s. As for the TPP, the government has made clear it is taking its time to review the 12-country Pacific Rim trade agreement before deciding to ratify.

Japan is embroiled in an ongoing territorial dispute with China in the East China Sea and South China Sea. China has been constructing islands despite the concerns of several Asian countries with territorial claims in the area.

It is not uncommon in diplomacy that things are deliberately left for convenient interpretations of both sides.
— Masayuki Tadokoro, Keio University

Without naming China, they also said they opposed the use of intimidation, force, or unilateral actions that seek to change the status quo in the Asia-Pacific.

Trudeau spokeswoman Kate Purchase said in an email that “there is no change in our position on the South China Sea.” She reiterated Canada’s position, saying: “As we have said consistently, we believe in the rule of law and discourage any unilateral actions.”

Keio University law professor Masayuki Tadokoro said Abe may have been trying to “extract” extra support from Trudeau on an issue that represents a real security threat for the Japanese.

“Abe may have exaggerated the level of support he got out of the bilateral meeting for domestic consumption,” said Tadokoro.

Trudeau may have been trying to steer clear of the issue “in the fear of undermining its relations with Chinese,” he added.

Tadokoro said while there’s no way to know what Abe and Trudeau actually said to each other, “it is not uncommon in diplomacy that things are deliberately left for convenient interpretations of both sides.”

Kenjiro Monji, Japan’s ambassador to Canada, said in recent interview that on security issues Canada has long kept its attention toward Europe and the south because it is an Atlantic state.

Monji said Canada is also a Pacific nation, but Canadians’ renewed focus on Asia has primarily been through “economic lenses.” He added that Japan has put a lot of importance on the TPP and hopes to ratify it as soon as possible.

Trudeau repeated his government’s long-held position Tuesday that the TPP was still subject to a thorough, cross-country review.

The TPP was negotiated by the former Conservative government and the Liberals have yet to signal whether they will ratify it.

But the future of the TPP is in doubt. U.S. presidential hopefuls from both major parties have said they would reject the deal if elected.

But it appeared his efforts in Tokyo wouldn’t immediately secure concrete commitments from the auto industry. Trudeau met with parts manufacturers and the presidents of three auto companies: Honda, Toyota, and Subaru.

The CEO of Fuji Heavy Industries, the firm that makes Subaru, told Trudeau he doesn’t have any plans to expand capacity in the near term, though he might in the future, the prime minister’s press secretary Cameron Ahmad said after the meeting.

There were no announcements of imminent deals with the others, either.

“I am very much in the relationship-building mode,” Trudeau told a news conference in Tokyo when asked whether the meetings would yield firm results.

“There are of course many positive conversations being had, not just by me but by our Trade Minister Chrystia Freeland, by Canadians working around the world to highlight the extraordinary opportunities to invest in our country.”

As part of his pitch, the prime minister also told Yoshinaga that Canadians are innovative and focused on quality.

He later described the meetings as having been successful.

Earlier Tuesday, Trudeau and his wife, Sophie Gregoire Trudeau, visited the Meiji Shrine, met with the emperor and empress of Japan, and had dinner with Abe.

Trudeau’s Tokyo visit came ahead of the Group of Seven summit on Thursday and Friday in Japan’s Ise-Shima region.