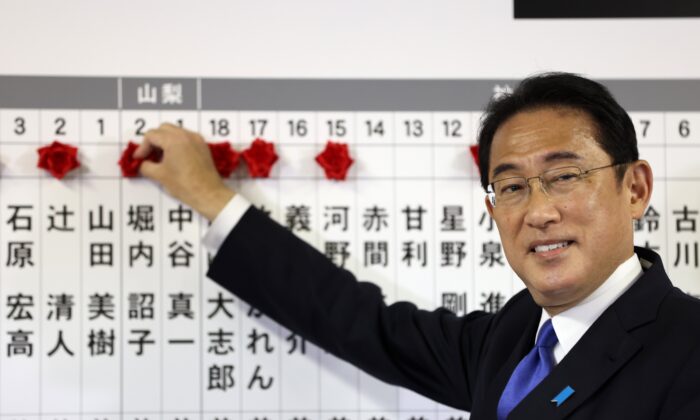 TOKYO—Japanese Prime Minister Fumio Kishida’s governing coalition kept a majority in a parliamentary election Sunday but was expected to lose some seats in a setback for his weeks-old government grappling with a coronavirus-battered economy and regional security challenges, according to preliminary results.

Kishida’s Liberal Democratic Party (LDP) and its junior coalition partner Komeito together have won 274 seats as of late Sunday, with some 40 seats still undecided, in the 465-member lower house, the more powerful of Japan’s two-chamber Diet, public broadcaster NHK reported.

The LDP has also won a single majority at 247 seats, with Komeito gaining 27 seats, according to NHK.

Their combined strength has exceeded a parliamentary majority of 233 and also “an absolute majority” of 261 seats—a level that allows the ruling bloc to control all parliamentary committees and easily ram through legislations. But it also showed a loss from 305 seats previously.

The LDP losses included those held by influential party members, such as secretary general Akira Amari, which may possibly require shuffling of key posts.

“The lower house election is about choosing a leadership,” Kishida told NHK. “With the ruling coalition certainly keeping the majority, I believe we received a mandate from the voters.”

Kishida said the projected loss of seats are in part due to opposition parties’ strategy of fielding unified candidates in many single-seat electoral districts, but also because of voters’ judgement of his predecessors over the past four years.

Kishida, 64, was elected prime minister on Oct. 4 after winning the leadership race in his ruling party, and dissolved the lower house only 10 days after taking office. The party’s conservative leaders saw him as a safe status-quo successor to Yoshihide Suga and his influential predecessor Shinzo Abe.

Exit polls were more or less in line with media predictions. Official results were expected by early Monday.

Kishida repeatedly stressed his determination to listen to the people and to address criticism that the nine-year Abe-Suga leadership had fanned corruption, tamed bureaucrats, and muzzled opposing opinions.

The campaign has largely centered on COVID-19 response measures and revitalizing the economy.

While the ruling party stressed the importance of having a stronger military amid worries over China’s growing influence and North Korea’s missile and nuclear threat, opposition parties focused on diversity issues and pushed for gender equality.

Opposition leaders complain that recent LDP governments have widened the gap between rich and poor, did not support the economy during the pandemic and stalled gender equality and diversity initiatives. Japan this year ranked 120th in the World Economic Forum’s 156-nation gender-gap ranking.

The opposition has long struggled to win enough votes to form a government after a brief rule of the now-defunct center-left Democratic Party of Japan in 2009–2012, as they have not been able to present a grand vision for the country.

On the economy, Kishida has emphasized growth by raising incomes, while opposition groups focus more on redistribution of wealth and call for cash payouts to pandemic-hit low-income households.

Kishida, during the campaign, promised to spur growth and “distribute its fruit” to the people as income.

Kishida said earlier Sunday he planned to reappoint the same members to his post-election Cabinet to speed up the work on a supplementary budget so that he can fund an economic package to provide support for the people and businesses hit by the pandemic.

“I will take concrete steps to achieve our policies as soon as possible,” Kishida said. “I need to move quickly.”

Before working on those, Kishida said he was heading to Glasgow to attend the COP26 summit on Nov. 2. “It’s a global issue for all mankind, and Japan has to take our responsibility,” he said.

Voters, including young couples with small children, started arriving at polling stations in downtown Tokyo early in the morning.

Shinji Asada, 44, said he compared COVID-19 measures to pick a candidate, hoping for a change of leadership, as he thought the ruling party lacked explanation and transparency over its pandemic measures. He said that despite Kishida’s promise to be more mindful of the people’s voices, “I thought nothing would change (under him) after seeing his Cabinet,” whose posts largely went to party factions that voted for him.

A 50-year-old part-time worker, Kana Kasai, said she voted for someone who she thought would “work fingers to the bone” for a better future.